We all love a good scary story, and luckily, they’re not just for Halloween. Famous ghosts and ghouls make for the very best scary stories, and luckily for you, we’ve rounded up our favourite famous ghost stories into this very handy list. Get prepared to be spooked.

It might not be a human ghost, but the Flying Dutchman is without a doubt one of the most famous hauntings of all time. Dating way back to the seventeenth century, this is one of those sea-faring stories passed between sailors during long, arduous voyages, but as with most sea stories, there is an element of truth to the tale.

The ship was doomed to being swallowed by the seas once the captain refused to turn back towards safer waters during a rough storm. Passengers and crew begged the captain to take to safer seas, and still he refused. He thought he would be able to take his ship through the storm, and somewhat foolhardily challenged God to take him, his people and the ship down. Thus, the ship was taken down. The Flying Dutchman is seen at sea either as a light or a somewhat translucent image, and brings with it a sense of doom. Moral of the story: don’t mess with the sea.

We’ve recently posted a great article on the real ghost ships spotted all over the world! 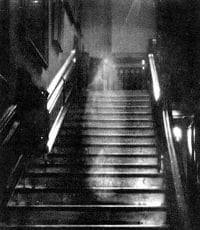 The Brown Lady is probably one of the most famous ghost photographs in existence. She appears in a photograph taken at Raynham Hall, Norfolk, as a translucent white figure in a hooded robe on a staircase. She’s known as the Brown Lady because she’s most commonly seen in a heavy brown dress.

The most common theory surrounding who the Brown Lady is is that she is Dorothy Walpole, who was married to Viscount Charles Townshend. She died in 1726 under what many people now believe to be mysterious circumstances and was seen regularly around the Hall until the photograph was taken of her in 1936. She’s now seen far less frequently.

Some of the most famous hauntings and ghost sightings have taken place at the Stanley Hotel in Colorado, which was the inspiration for Stephen King’s The Shining – which, as an homage to the place, now plays 24/7 on every TV channel.

A few of the ghostly goings on at the hotel actually appear in the book and in the film. For example, staff at the hotel claim to have heard music and a commotion in the ballroom in the middle of the night and whilst it has been completely empty.

Children are heard racing through the halls, and guests have even reported seeing ghostly figures watching them in their rooms. Room 407 is thought to be home to Lord Dunraven, who used to own the land on which the hotel is built. He’s often blamed for any jewelry that goes missing – and, unsurprisingly, for the large amount of activity that occurs on the fourth floor.

Starting in the late 1970s, the Berini haunting occurred at the residence of Joe and Rose Berini and their two children in New England. The two children were from Rose’s previous marriage, and in 1979, they were visited by a ghostly young girl who claimed that her name was Serena. Neither Joe nor Rose knew of a Serena in their family and were puzzled by the visit, although it was not without consequence, because shortly afterwards, their daughter Daisy nearly died during an operation to have her tonsils removed.

These spooky visits from childish ghouls and unfortunate events in the life of the Berini family became more common – with events culminating in Rose levitating out of her bed and two exorcisms before the family was finally left in peace. 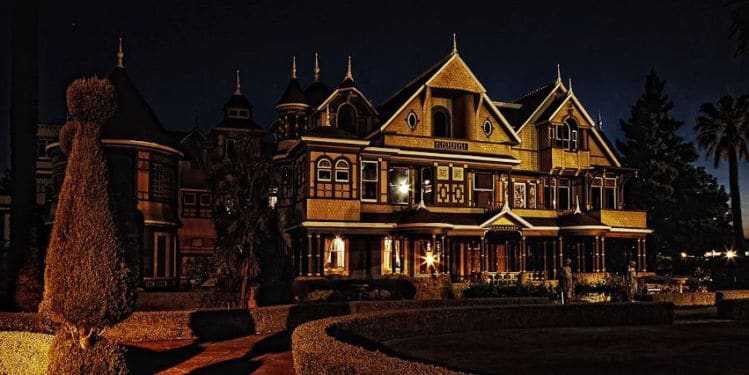 Home to some of America’s most famous ghost sightings, the Winchester Mystery House took 38 years to build – under the guidance of ghosts and ghouls. Instead of using architects to help with planning and design, Sarah Winchester, grieving after the death of her husband, asked for the help of a medium. He told her that he and her daughter had died due to a curse on the family because too many people had died at the hands of the Winchester gun. Sarah had to move, and not only that, but she had to build a house specifically for the spirits. But she couldn’t just build a house for them. If she ever stopped building, the curse would get her too.

A bell tower was added to summon and dismiss the spirits and a séance room to speak with the spirits directly, as well as her husband. The house is known as the mystery house – and in fact, tours are still given there today – due to the odd layout of the house, designed to flummox bad spirits and keep Sarah safe from the curse. Hallways doubled back on themselves, doorways dropped down to nowhere and led to windows, stair posts were installed upside down and everything in the house had 13 of something. 13 stairs, 13 panes of glass, 13 windows in the 13th bathroom… whether she thought using the number 13 would keep her safe from demons or not remains to be seen, but it’s a fascinating house.

Some of the most famous ghosts and ghost stories come straight out of Alcatraz – because what could be spookier than an abandoned prison on an island? People still visit parts of the prison that are off limits today, even though it is highly forbidden, and bring back with them stories of ghouls, ghosts and incredibly terrifying encounters following them back to the mainland.

The first hauntings were reported in 1857 when men were still being imprisoned there, and one of the most notorious stories was reported in the 1940s when a figure dressed in clothing from the 19th century haunted cell block D, which contained an isolation cell. One inmate pleaded with guards on one night: he was being attacked by the apparition. He was screaming, crying, begging, pleading for help. He fell silent come morning and the guards finally went to check on him, when it was found that he had been strangled to death in a way that he could not possibly have inflicted upon himself. He too became one of Alcatraz’s many ghosts.

Over the years, reports of cold spots, injuries on guards and inmates at the hands of an unseen and unknown entity, howls and screams from an unseen person and much, much more have been reported at Alcatraz, making it one of the spookiest spots in America, and well deserving of a spot on our famous ghost sightings list.

Britain is home to a number of famous ghosts and ghouls – it’s probably all of the castles and stately homes we have. It’s fun to give yourself a scare from time to time, but for the extra scare factor? Look up some videos from the hauntings we’ve mentioned above and watch them in the dark, alone. We dare ya! Or take a look at our list of the 12 best ghost stories ever written!

We didn’t mention in the list above, the true story of the enfield haunting, which due to recent publicity is probably now one of the most famous ghost stories in the world.