Everyone loves a good spooky story. Whether you’re trying to scare yourself stupid by watching the latest horror movie or are looking for ghost stories for kids to give them a little bit of a jump scare, the creepiest stories are a fabulous way to give yourself a bit of an adrenaline rush. Here, we share our pick of the very best ghost stories for children, ranging from the slightly spooky for the younger kids to the more complex tales for older children who are able to take a little bit more of a fright. Enjoy, and try not to get too spooked!

This is probably one of those ghost stories for kids that’s best left for slightly older children, just as an FYI!

A young teen is babysitting for a family that is very, very wealthy, in a large mansion filled with a huge number of rooms and a vast number of interesting antiques and artefacts. Strangely, though, the father mentions to the girl that once the children are put to sleep for the night, the girl should only go to the basement and not spend her time in any other rooms of the house. She could watch television down there and was free to do anything else in the basement, but the rest of the house was off limits.

She goes to the basement once the children are in bed, but quickly notices a large clown statue in the corner of the room. It appears to be staring at her. She continues to watch her show, but can’t shake the feeling that the statue is following her around the room with its eyes. She puts a blanket over the statue eventually in an effort to make herself feel more comfortable, and then telephones the father of the children to ask if she can go and move to another room of the house, because she’s so freaked out by the clown.

“You need to leave NOW. We don’t own a clown statue. The children have been telling us they’ve been seeing a clown in their room in the night, and we thought they were having nightmares. Take the children and get out!”

The young girl hangs up the phone, terrified. She turns around, but the statue is gone, leaving behind only the blanket on the floor.

4. The Hitchhiker That Never Was

This is one of those perfect short ghost stories for kids as they can expand upon it in many, many ways. Enjoy!

A girl in a pretty white dress and embroidered sweater flags down an old man for a ride. He gives her a ride to her great-grandmother’s house and they have a lovely conversation, talking about the old days, and the elderly man shares some great stories with her. He drops her off at her geema’s house and he goes home. The following day when he gets into his car to pick up some milk and the paper, he realises the sweater is still in his car. He swings by the young girl’s geema’s house to drop off the sweater, and her geema answers the door. He explains why he’s there.

“I’m sorry Sir. I think you have the wrong address. My great-granddaughter died many, many years ago, wearing her favourite white dress, after a night out dancing.”

The Hook isn’t so much a ghost story, but rather an excellent scary story, which is why it has a place on our scary ghost stories for kids countdown. Keep this one for kids age twelve and up.

One night, a teenage boy and his girlfriend headed to their local lover’s lane so that they could spend some time alone together. The girl was a little bit afraid because on that day, she’d heard over the radio of a man who had been released from a local insane asylum, known as the Hook. His hand had been mangled in an accident and he’d had it replaced with a hook, because there were no prosthetics available at the time. The night was dark and the teenagers cuddled up together. Another announcement was made over the radio to warn people about the Hook and to stay vigilant and the young girl pulled away from the boy, scared, asking him if they could go home. Just then, the car started to shake and the doors rattled. The teens peered outside but couldn’t see anyone outside. The car shook vigorously again once more and the boy decided it was time to leave and so they sped away. On the way home from their date, the couple stopped off at a late night diner for some coffee and chicken. Once they got out of the car, what did they see? Long scratches down the sides of the car, and a hook, stuck in the handle of the car door.

Children’s ghost stories don’t always have to be scary. In a way, the one below is kind of sweet.

Once upon a time, a man and a boy who had lost their wife and mother moved into a new house. They were told by the locals in the village that the house was haunted, but neither the man nor the boy believed in ghosts, and they moved into the house quite happily. The child went downstairs and asked the maid of the home for a glass of water and some fruit, and she happily obliged. She also told the boy that there could be ghosts.

Later that day, the little boy struck up a conversation with his father. “Daddy, I’ve been thinking. I could believe in ghosts. The maid told me there might be ghosts in the house.”

Next, another of our spooky short ghost stories for kids, probably best suited for children over ten.

On a cold, winter day, Mr. Sullivan “came to” whilst walking alongside the edge of a road. He walked over to a woman and asked her for some help, only for her to scream loudly at the mere sight of him and run away in fear. Astonished at her response, Mr. Sullivan continued on his way and tried to flag down several passing cars, only for them all to speed up as soon as they saw him. He eventually called a taxi company and when they arrived, they looked at him and they too sped away. The man went back to the same phone booth and called his wife, wanting to know what on Earth was going on and why people seemed to be so afraid of him. A man answered the phone, in a voice he didn’t recognise.

“Unfortunately, Mrs. Sullivan isn’t available at the moment. She’s at her husband’s funeral. He died in a car accident last night.”

Finally, Mr. Sullivan found his way to a public bathroom. He looked in the mirror and found his face bloodied and bruised, his skin a mess, and his bones broken. His skin was pale and his eyes bloodied. He realised why everyone was so reluctant to stop for him. He was dead. He was a ghost.

Ghost stories for kids can be as spooky or as non-spooky as you want to make them. You can elaborate on them, cut the scariest bits out, or let your children elaborate on them and create their very own scary ghost stories, which is especially good for the youngest children. Embrace the jump scares and enjoy that tingle of fear – that’s what ghost stories are all about! 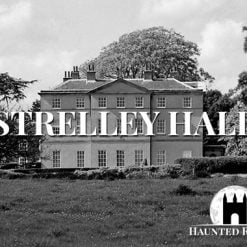 Haunted Hotel of the Month

(Want to be Featured?)