History of the Ouija Board: Stories to Keep You Up at Night

History of the Ouija Board

Ouija boards first started appearing in the late 1800s – in fact, the very first ouija board was sold in a Pittsburgh toy shop, and was almost identical to the boards sold today. A board with letters A through Z, numbers 0 through 9, the word “goodbye” and the words “yes” and “no”, as well as the teardrop-shaped planchette used to move around the board, with a window for viewing the letters.

The advert for the ouija board in a newspaper sold in New York mentioned that the board was “proven” to work at the Patent Office and described it as being mysterious. Although ouija boards sold today aren’t quite as sturdy as the boards sold back then, a few things hold true from that initial advertisement – ouija boards are mysterious. The patent was proven before it could go through at the Patent Office. And many, many people, including experts in the field of the paranormal and psychology believe that these deceptively simple boards can offer a link between our world and the next.

Ouija board stories starting cropping up as soon as the first boards were sold, and many of them have no real scientific explanation. 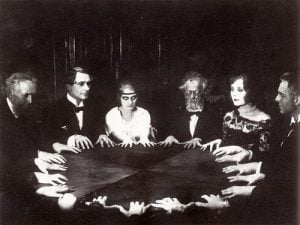 When we talk about ouija board experiences, or think about stories of a ouija board gone wrong, we need to think back to why ouija boards were invented. Back in the 19th century, Americans were more than a little bit obsessed with spiritualism, and this was by and large borne out of a need to communicate with lost relatives – largely due to the fact that the average lifespan was less than 50 at the time. Spiritualism fits well with Christianity, and activities such as seances could occur right after a Sunday sermon.

People started to use ouija boards to communicate with lost loved ones, and their own ouija board experiences started to cement what they’d always thought – that spiritualism could help them communicate with the dead and that once someone had passed on, it didn’t mean that they were gone forever. This helped many – and does still help many people – find solace in loss and death, although of course, there were many people that took advantage of these people, faking paranormal events in order to gain money and exposure.

Although some of the events surrounding ouija boards were definitely exaggerated or outright completely faked, we’ve heard of enough true ouija board stories to realise that there is definitely something spooky about this wooden board. 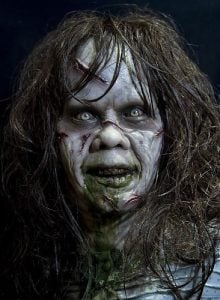 There are plenty of ouija board stories out there – a quick Google and you’ll find hundreds almost immediately. One of my favourites is this one, from a Buzzfeed list about ouija stories, which also includes a nice little anecdote about shadow figures:

“My brother’s friend played with one at his house, and all hell broke loose. Their family would see pennies and marbles being thrown down the hallway. One day, his mom was doing yard work and saw a dog, and when she called the dog, she said that it suddenly had an old man’s face. Things got so awful they had to call a priest to do an emergency exorcism. To this day, they still see black shadow figures follow them.”

My Ouija Board Story

I also have my own ouija board story. I have a very close friend whose mother practices white wicca, so we followed some of those instructions for setting up the ouija board, with around 4 or 5 other girls. We were around 14 at the time. One girl was the “leader”, and she had to set up what was known as a “safe circle” – a circle of salt that enclosed us, the ouija board, the table we were working on and the glass we were using as the planchette. The salt, according to wiccan lore, was to keep out negative spirits that meant to do us harm. Only the leader could break the circle, using a knife to cut it, sprinkling the salt back down to seal up the circle.

Although my story isn’t particularly scary, it’s safe to say that that was the night that I truly realised that I believed in the supernatural. We communicated with about 5 different spirits, learned a few names, and felt a tickle on the back of our necks. A few of us also had our hair pulled, and we realised after using the board for another hour or so that it was likely that the spirit pulling our hair was a toddler who just wanted to play. None of us felt scared, and even though I was initially a little bit worried that I wouldn’t be able to sleep – that I’d lay awake worrying about everything that had happened and all of the spirits in the house – it ended up being one of the most peaceful night’s sleep I’ve ever had.

Are Ouija Board Stories Real?

Whenever ouija boards are discussed with certain sceptics, you always get one response: someone at the table is pushing the glass. Back when the original game was popular at parlour events, it was not uncommon for a small child to hide under the table with a magnet and move the planchette around with said magnet.

Sceptics and psychologists alike tend to believe that even if no-one at the table believes that they’re pushing the glass, they may well be subconsciously giving it a little nudge simply because everyone at the table wants something to happen. In fact, everyone at the table might be pushing it. But how can everyone be pushing it when you’re putting only the tiniest bit of pressure on the glass or planchette, placing just your fingertip onto it, making sure that you don’t place any weight onto it? We’ll never know for sure, but when we hear stories of a ouija board ghost, it’s easy to believe in the lore.

Many people have stories of a ouija board gone wrong, like this quick tale from the same Buzzfeed list mentioned above:

“In high school, my best friend and I bought a ouija board and got into her car to go to a park to play with it. After a few minutes, the feeling of absolute dread came over me. It felt like someone I love had just died — I felt nauseous and had a heavy heart. It was so sudden that it startled me, because I’d just been so pumped. I suddenly couldn’t stop bawling, so I turned to my friend, and she was crying, too. Without even speaking, we were experiencing the exact same thing. We turned the car around, and as soon as we did, the feeling stopped. It took us years to finally touch the board again, and that was to throw it out.”

It isn’t uncommon for spooky or downright terrifying paranormal activity to occur when a ouija board is used, but they can also be used for good. Not all ouija board experiences are scary. Not all ouija board stories are evil. Some are perfectly peaceful encounters that help to bring closure between relatives or friends from the other side. Some – admittedly, are a little scarier than you might anticipate.

If you pick up a ouija board, make sure that you take reasonable precautions, such as the Wiccan outlines mentioned above. And if you’re still unsure? It’s probably best to leave the ouija board entirely alone.