It’s fair to say that Key West, Florida is well-known for being haunted. There are many stories surrounding Key West and the wider state, but one of the most famous is of Robert the Doll, Eugene Otto and the elements of Bahamian voodoo said to link the two together. Although Robert seems to be nothing but a rather careworn doll; dressed in a sailor suit, holding a toy dog, covered in small marks that seem to appear a little too like scars, with small beady eyes and a smirk on his face, many agree that he is directly responsible for a veritable bounty of woe. Robert has, over the years, been accused of causing car accidents, relationship breakdown, divorce, death, disease and much, much more.

Where Did Robert the Doll Come From?

Although Robert’s origins are disputed, as this is one of those stories that gets passed around from family member to family member within the state, it’s generally thought that Robert was given to Otto as a present from his grandfather following a trip to Germany. After some investigation by the Fort West Martello Museum where Robert resides today, it’s now thought that the doll was never actually intended to be a doll. It’s thought to be made by Steiff, and perhaps to have manufactured as part of a clown or jester display. That outfit? It’s thought to be Otto’s own. Oh, and if you’re wondering where Robert got his name? From Eugene. That’s right – Eugene’s full name is Robert Eugene Otto, and soon, the doll ended up with the name Robert, while Otto was simply referred to by his middle name.

Another story about Robert the haunted doll and his origins describes the Otto family’s mistreatment of their servants and maids. The family lived in a large mansion house that still stands today – it stands at the corner of Simonton and Eaton. The size of the house meant that the family needed “help”. One maid was apparently caught using voodoo and was quickly fired, but before she left, she gave Robert to Eugene. But Robert was cursed – she’d used some of the voodoo that she’d been fired for on the doll to bring fear and discomfort to the family. 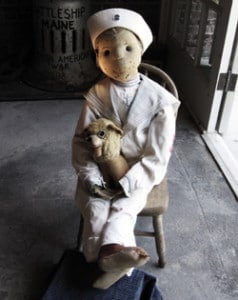 Robert the haunted doll is well-known for being more than a little spooky, but in the beginning, things seemed a little bit more innocent – like any other childhood friendship between a boy and his toy. Eugene took Robert everywhere with him, and even though the Robert doll was probably a little bit large and unwieldy for a boy of his age – Eugene was thought to be around 8 when given Robert, and Robert stands at around three feet tall – he was never seen without his beady-eyed companion in tow. Eugene was often heard whispering to Robert, which was entirely normal. It was only when a deep voice was heard answering back to Eugene that things started to get a little bit strange.

The Robert the doll story gets stranger and stranger as the years go on. Robert was said to have somewhat of a hold over Eugene and loud, violent commotions could be heard coming from Eugene’s bedroom on an almost nightly basis. Furniture could often be found overturned, toys of Eugene’s were often found ripped apart, and when the Otto family entered Eugene’s room, he was found huddled on his bed, petrified. When asked what had happened, he only ever had one response. “Robert did it.”

Stories of Robert the doll moving meant that he was quickly banished to the attic. Servants arrived and promptly quit their jobs in quick succession, and it’s also claimed that the aunt that banished Robert to the attic died the same night that he was put there. Despite his banishment, the Otto family were said to hear Robert the doll moving frequently around the upstairs portion of the house, with his footsteps said to echo throughout areas of the property that were completely empty. He was even said to giggle in the middle of the night.

Eugene Otto as an Adult

Despite all of this, and despite his obvious fear of Robert as a child, Eugene kept Robert as he grew up and into an adult. He worked as an artist and later married, and kept Eugene propped up in a window of his house. Schoolchildren and almost anyone walking past the property would say that they often saw the doll disappear from sight before appearing again before their eyes. Many people avoided the house entirely so that they could avoid Robert. Annette, Eugene’s wife, was said to detest Robert, and supposedly banished him back to the attic. Naturally, he didn’t take particularly kindly to this, and so Robert the haunted doll once more placed demands on Eugene, requesting the Turret Room of the house because “he wanted a room with a view of the street.” Gene spent all of his time in the Turret Room with Robert, painting and talking to his doll, until his death in 1974.

The story of Robert Eugene Otto doesn’t end with his death. The Robert the doll story continues well past Eugene’s death, and the legend continues even to this day. The woman who bought Eugene’s house, Myrtle Reuter, was Robert’s caretaker following the sale of the house. Reuter corroborated many of Eugene’s stories and often found Robert in an entirely different place to where she had left him. Visitors to her new home didn’t like Robert, and found that he’d appear and disappear at will. She and her visitors also claim that the already creepy expression on Robert’s face appeared to change when anyone discussed Eugene in a negative way. In 1994, Myrtle donated Robert to the Fort East Martello Museum in Key West, FL, where he still resides today.

You’d be forgiven for thinking that perhaps being locked inside a glass case would mean that Robert’s antics were well and truly over, but that couldn’t be further from the truth. Robert’s big move simply meant that the legend grew stronger and that he was exposed to more and more people – today, he even has his own social media accounts and a Robert replica doll is sold. If we’re to believe anything about voodoo, perhaps with the increased exposure of Robert, plus replicas of him being sold, the increased bad luck of visitors to the museum is simply due to the curse being spread further and further afield.

Robert at the Museum

Staff at the museum claim that Robert has been found in different positions within his case, that footsteps have been heard around the museum at night with no apparent explanation for the noise and that Robert’s expression has been known to change in a from neutral to nasty in the blink of an eye. Visitors to the museum are given advice on how to approach Robert: to speak to him in a polite way, to ask his permission to photograph him and to treat him with respect. The walls of Robert’s display are littered with letters from visitors apologising for their behaviour when visiting the museum: they claim that they’ve encountered dreadful misfortune, gotten into accidents, had relationship breakdowns or even experienced death or disease in the family after visiting Robert, and these letters seek to ask his forgiveness. There are over one thousand letters in total, and the museum keeps and catalogues all of them for future reference.

To learn more about Robert the doll and the story behind him, you can visit the museum website – or, you might even want to send Robert a letter and see whether you get a response…

Robert the Doll is famous around the world, but perhaps even more famous because of recent films, the Annabelle Doll is another haunted doll you have to learn about. We’ve put together a quick article on the true story behind Annabelle from the Conjuring!