A fear of dolls is known as pediophobia, which is pretty closely related to a fear of puppets, unsurprisingly. It’s safe to say that most of us aren’t a huge fan of dolls, and with films like Annabelle and The Conjuring becoming more and more popular, even hardened horror fans are having to put up with these scary dolls. Although people might not necessarily be scared of dolls, it’s safe to say that they creep many of us out. We’ve been playing with dolls for thousands of years, which is perhaps why haunted dolls have been part of folklore for hundreds of years too.

Legend tends to follow that because dolls are humanoid in form, sometimes, spirits inhabit a doll when they’re roaming this plane because they don’t know where to go and dolls look familiar to them. They may may inhabit the doll of a former owner, or a doll that they used to own. Another theory is that these scary dolls may be possessed or cursed. Possessed dolls are often associated with demon or poltergeist activity, while cursed dolls tend to be associated with voodoo. Stories of cursed dolls are rarer, although they do exist – Robert the doll in Florida being one of the most popular. Sit back, relax and enjoy whilst we explain just why these dolls are scary and explore some of the spookiest stories of these devilish dolls.

Why Are Dolls Scary?

Scary dolls have existed in many forms for hundreds of years, and although scary is subjective, it’s understandable that we find some dolls scarier than others, simply because of the uncanny valley effect. This is when something looks human, and we accept it as looking human, but there’s something slightly off about it. It’s that “offness”, that something that we can’t quite put our finger on that creeps us out. And that’s without a doll being haunted.

1. The Story of Annabelle 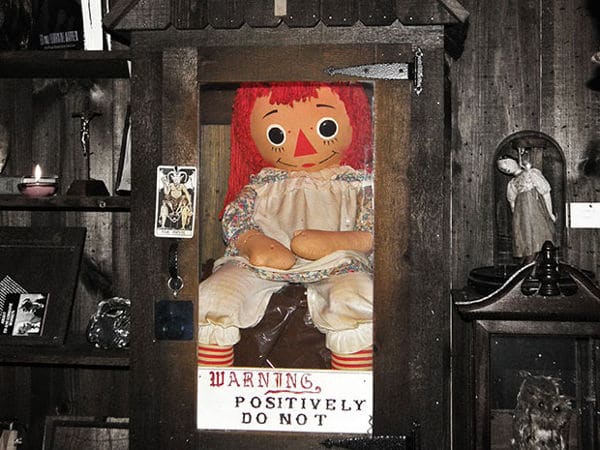 Annabelle, the scary doll featured in the Conjuring films as well as the more recent Annabelle film was actually based on the stories of the Warrens. She’s one of the most notorious haunted dolls in history, and you can still meet her today – if you’ve got a spare $169 to drop. Do you want to spend four hours with one of the creepiest possessed dolls in America? Us neither.

Annabelle used to belong to the Warrens. They took an item from every paranormal investigation they went to, and as the legend goes, “trapped” the errant spirit inside said item. Annabelle was supposedly one of the most violent and aggressive spirits they ever had to deal with and was known for moving around the house on her own, scratching her owners and talking. Once Annabelle was dealt with, she was kept in a locked box in order to protect the Warrens, because they couldn’t risk her getting out. Her case is now supposedly blessed with holy water.

Read the story of the real annabelle doll 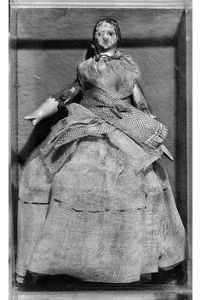 Poor Patty’s doll. She had to cope with a lot. Whilst she isn’t known to be haunted, she’s definitely a scary doll, for sure. She’s quite difficult to look at, and the expression on her face makes you think that she’s definitely seen a lot. As the story goes, Patty’s family, the Donner family, were cannibals. They ended up getting stuck in a snowstorm and turned to eating the only things they could – leather, mice, and eventually, each other. Patty’s doll was witness to the clan eating each other and although they and the doll ended up back in San Jose, it’s fair to say that the poor doll was witness to a lot of atrocities. It’s now on display in Sacramento if you want to witness a bit of creepy American history. 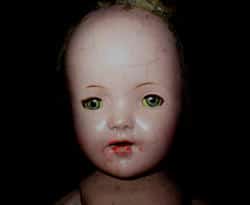 In this family, creepy dolls are part of history. Each woman has two children, a girl and a boy, but the boy dies just three days after being born – and this has happened for four generations. Anna, the youngest woman to be cursed by the doll, believes that Joliet was given to her great-grandmother. Infant screams, cries and giggles have been heard coming from the doll, small footsteps have been heard in the night and for each generation of the family, the infant’s voice changes. The women believe that Joliet curses the women and claims the boys as her own. 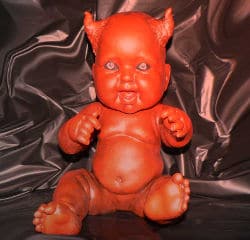 If a doll is known as a devil infant, you just know it’s going to be creepy, right? This evil doll tale starts in New Orleans, home of voodoo and witchcraft. The area is well known for creepy folklore and it’s little surprise that the story of this possessed doll takes place here. Marie Laveau supposedly cursed the bride of a Scotsman back in the 1800s and the bride died in childbirth. But the curse was’t over with. The bride birthed “the child of Satan”, and the father bought the child home.

Although the baby was looked after by her father until her death, residents feared the child greatly. She was said to walk in the shadows and terrify residents in the state, and they started to buy recreations of the baby in order to keep themselves safe and ward off evil. However, because these dolls were created in the baby’s image, they were said to be possessed. Remnants of these dolls can still be found today, and new dolls are created from them. Beware, though, as these are said to be haunted dolls, and the devil infant can still cause mayhem, with the eyes moving on their own and the dolls disappearing and reappearing at will.

Many people collect paranormal memorabilia and spooky, scary dolls and haunted toys are a horror fan’s favourite. Scary stories about dolls are a brilliant way to sell these artefacts and although we can take a lot of these tales with a rather large grain of salt, with some of the more famous stories, there is always an element of truth buried somewhere in the tale. Would you want to take that chance?

Read our article on Robert the Doll.