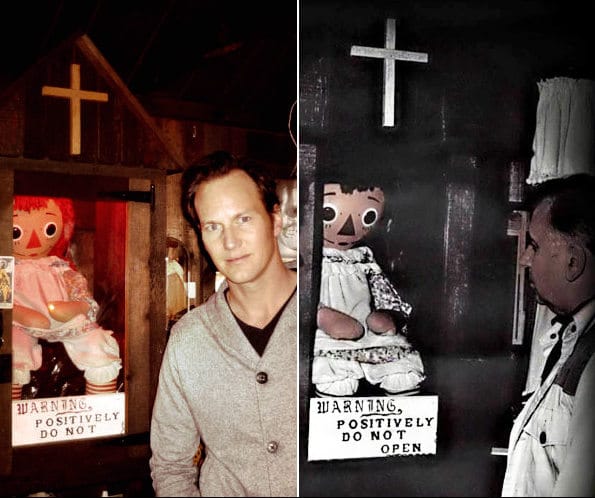 The real Annabelle was given to Donna, who was a student nurse as a birthday gift by her mother. One thing to remember: Annabelle was bought second-hand from a hobby store. She was living with her friend Angie at the time, and Donna was delighted with the gift. At first. But the Conjuring doll quickly became a source of great fear for the girls. Annabelle made only very small movements to begin with, that could be put down to Donna and Angie accidentally moving her – for example, ending up on the floor instead of on the chair. Maybe she just fell off? Soon, though, the movements started to increase, and the doll started to move more – for example, she may have ended up on the couch instead of on Donna’s bed, or outside Angie’s door immediately after she was returned to Donna’s room.

Their close friend Lou was very nervous of the seemingly innocent raggedy doll. He believed that she was evil, or possessed, and that something needed to be done about it. But Donna and Annie were very progressive in their views and didn’t think anything of the sort and still believed that perhaps they were to blame for the movements of the doll.

The Annabelle doll story quickly became more sinister. Soon, the girls started to find notes around their apartment. The strange thing was that the notes were written on parchment paper, and neither of the two girls had ever used parchment paper before. The notes said various things, but most commonly, they said things like “Help Lou” and “Help us”.

Finally, the doll from the Conjuring, Annabelle, was found with blood on her hands. Donna came home from work one day and found the doll in her usual spot on her bed, (which made a change), but unfortunately she had literal blood on her hands. It seemed almost like the blood – or the red liquid, whatever it was – was coming from the doll itself. That was it. It was time for the girls to call in some help in the form of a medium to find out just what was going on with this doll before things got worse.

The first medium sat down with the girls and Annabelle, scary doll, and the story that Donna and Angie were given was that the land on which their apartment complex was build used to be a field. A young girl, aged around seven years old, was found dead there many years before. When the doll came into their apartment, Annabelle’s spirit was still in the area in which she’d died, and because she was fond of the doll, her spirit became one with it. Annabelle became Annabelle the doll. Unfortunately for the girls, Annabelle became Annabelle the haunted doll. Donna and Angie were very loving and giving, however, and because they were felt sorry for the poor girl that had been found dead alone in that field, they wanted the doll to stay because they didn’t want her to be left alone.

Lou was the one who was attacked by Annabelle before the Warrens were called in. Maybe she didn’t like him, or maybe he reminded her of a man who had treated her badly in life, but he was the one that she showed her true self to. A few things occurred, including some bad dreams and some visions of Annabelle, but the attack that made Donna and Angie call the Warrens was a physical one.

Angie and Lou were spending some time together when they heard movement in Donna’s room, but she wasn’t at home. They were frozen in fear; at first they were concerned about an intruder, but they quickly realised that the movement was in fact Annabelle. Lou took a look inside Donna’s room and there was no-one inside, although the doll was sitting on a chair instead of sitting on the bed where she should have been. He moved forwards toward Annabelle and a feeling crept over him, that creeping feeling you get where something is terribly, terribly wrong. He felt a terrible pain on his chest, and realised that there was a series of claw marks, raking marks like someone had leapt at him and roughly scratched him. No-one was in the room, and so he knew that the marks must have come from Annabelle. What was stranger still about these scratches is that they healed straight away and within just two days there was no trace of them at all. The Warrens were then called in. 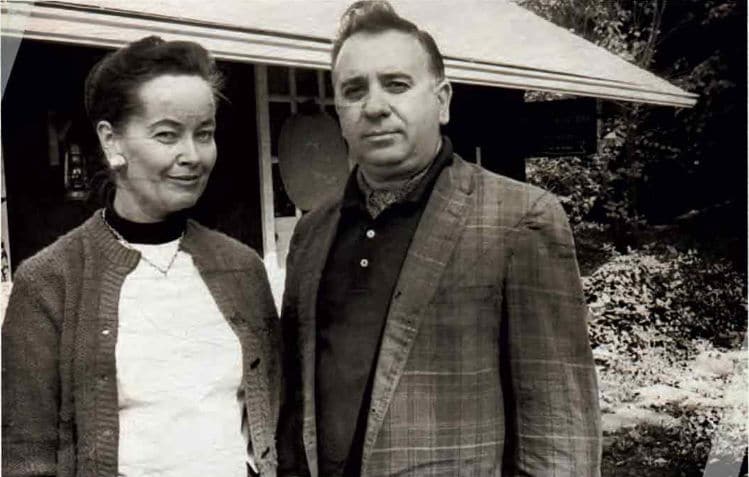 A priest was called into the apartment along with the Warrens and it was discovered that Annabelle’s main goal was to take possession of Donna’s soul. Annabelle was a demon. She was attached to the doll. The Warrens said that demons don’t possess items or things, instead, they possess people. The priest eventually exorcised the apartment, and the Warrens took Annabelle away with them. They both agreed that it would be best to drive home on the back roads, worried that if they drove on the main highways that Annabelle would find a way to cause an accident. Sure enough, they were plagued with car problems the whole way home: the power steering failed, the brakes failed and the engine of the car kept stalling. The problems ceased for a little while once Ed Warren sprinkled Annabelle with some holy water. 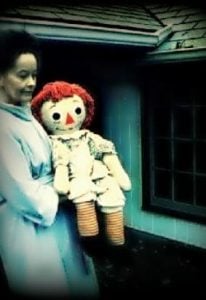 Once the pair got home, Ed put the doll on his desk, thinking that she’d be safe there for a little while. Soon, she showed them what she was really made of. Annabelle was seen rising above the desk, levitating, on multiple occasions. Soon, that activity slowed down and stopped, and the Warrens thought that perhaps the demon had quieted. But she was soon found in different rooms of the house, moving around, and when the Warrens put her in one place she would quickly be found in another. Ed and Lorraine called the priest, but he didn’t seem to take it too seriously, and said to Annabelle that she couldn’t hurt him because she was just a doll. That was a big mistake, because he was in a car accident on the way home. The car turned over, the brakes failed and his car was completely written off. Although the priest was badly hurt, he did survive.

Annabelle is still around today, residing in the locked glass case that the Warrens built to keep her from getting free and roaming around their house. There is a warning sign on the case, saying “Do Not Touch” as well as a cross. Some say that they see Annabelle moving around the case, waiting to get free.

Annabelle in the Conjuring wreaked havoc on those around her, and the real Annabelle doll most definitely did the same. The Conjuring doll is one of the spookiest tales in modern history when we talk about haunted objects, particularly because she had to be kept behind locked glass – and particularly because the Warrens didn’t manage to rid the doll of the demon. Annabelle is still available to view today. Would you dare to visit her and learn more about the conjuring true story?

You may also like:  The Enfield Haunting – Conjuring 2 True Story | World’s Most Haunted Dolls | Robert The Doll – Eugene Otto’s Enchanted Doll
Recent Posts
Join Waitlist We will inform you when any tickets become available. Please leave your valid email address below.