The Ragged Cot inn, situated just next to 600 acres of National Trust common land and just outside the market town of Minchinhampton, is a warm and charming hotel said to be haunted by the ghosts of ex-landlord’s Bill Clavers wife and child…

Guests at the Ragged Cot have reported hearing strange noises at the hotel, and on occasion, there have been sightings of two ghostly apparitions.

As the story goes, in 1760 ex-landlord Bill Clavers decided to rob the midnight stagecoach travelling to London. To give himself the necessary courage to rob the coach, he got drunk on rum and staggered in the direction of the coach with two loaded pistols.

His wife, with their child in his arms, tried to dissuade him of robbing the coach. He pushed her aside and she fell down the stairs. After robbing the coach, he arrived back at the hotel to see the bodies of his wife and child in a slump at the bottom of the stairs. Terrified, he put their bodies in a trunk.

The local constables arrived at the hotel after following Clavers’ footsteps in the snow and they were confronted by the apparition of his wife and child. They retreated into the night, and when they came back in the morning, the bodies of his wife and child were back at the bottom of the stairs and Clavers was led away a doomed man. He was later found guilty by trial and was sentenced to death by hanging.

The Ragged Cot has been an inn since the 17th century when it was used as a coaching inn. Parts of the building still date back to the 17th century today and evidence of that old-world charm is seen throughout the hotel.

Minchinhampton itself is an ancient market town with a number of shops and two churches. It’s close to the old Ministry of Defence airfield, Aston Down, which has now been closed down and is often used for gliding. However, in 2005 it was revealed by the local newspaper that Aston Down is contaminated with arsenic, radium, and hydrocarbons.

Minchinhampton was also the birthplace of novelist Joanna Trollope and is home to actor Keith Allen. Singer Lily Allen has also bought a home close to the parish

The Ragged Cot inn is one of the few inns left in England that remains under private ownership and that has not joined a chain. That being said, you can expect a warm, friendly welcome from the team along with lots of charming features. The inn has been graded ‘Three Crowns Commended’ by the English Tourist Board, and it has also been recommended by the AA and the Condé Nast Johansens. You’ll also find it in a number of guides, including The Good Pub Guide and the Good Beer Guide.

There are nine en-suite rooms at the hotel, comprising of two master rooms, two twin rooms and five double rooms. All of the rooms are named after famous Penguin books, which is a charming touch. The hotel restaurant offers breakfast, lunch and an evening meal every day except Sunday. Some of their dishes include pan-fried calves liver, twice-baked cheese soufflé, saddle of lamb and chocolate pannacotta. Breakfast is served between 8-10 am, lunch is served between 12-3 pm and dinner is served between 6-9.30pm. The restaurant uses only fresh, seasonal produce, taking many vegetables from its own kitchen garden.

If you’re looking for a relaxing break surrounded by beautiful countryside, the Ragged Cot is an excellent choice. There’s plenty of opportunity for long walks over the common land, and you can participate in many recreational activities including golf, bird-watching, horse riding and horse racing, clay-pigeon shooting and gliding. Travel a little bit further out and you can explore shops, boutiques, museums, art galleries, and local markets.

A full English breakfast is included in the room rate.

Related pages: The Most Haunted Places in Gloucestershire 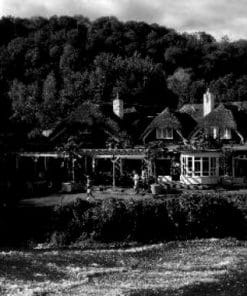 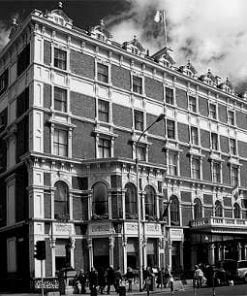 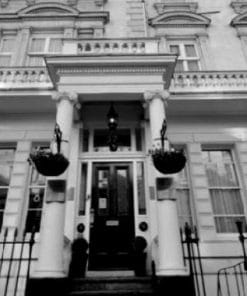