In 1987, the movie Three Men and a Baby came out and it was an absolute smash hit. Mr. Leonard Nimoy himself was the director, hottie of the moment Tom Selleck the lead alongside his lovable co-stars Ted Danson and Steve Guttenberg, and quite simply tells the story of three bachelors who help to take care of a baby who has been left behind by one of their girlfriends. It’s one of those lovely warm and fuzzy tales, reminiscent of those nineties-era films like What Women Want and more than one Friends episode, but what you might not remember (or maybe you do) is the Three Men and a Baby ghost. Throw on your legwarmers, cut your hair into a mullet and take a trip with us back into the eighties as we explore the legend of the little boy ghost in Three Men and a Baby. 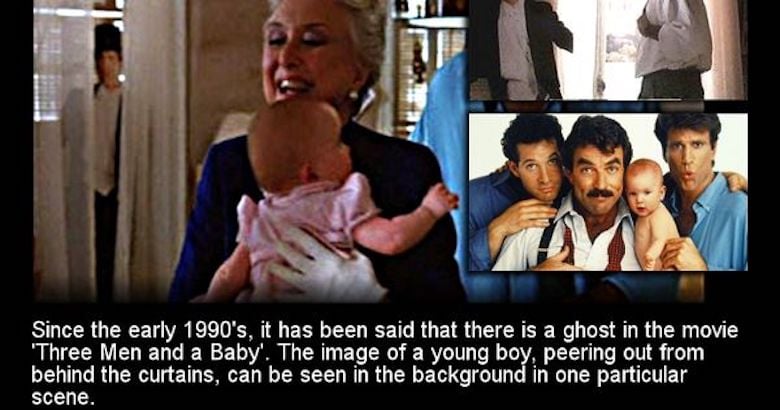 Three Men and a Baby was actually the first ever Disney film to make over $100 million domestically in the U.S. – it was a hugely popular film, and people loved the camaraderie between the three men as they tried their very best to take care of the baby with absolutely no prior experience. It was absolutely the very definition of being chucked in at the deep end. It got even more popular, however, right before the sequel Three Men and a Lady came out in 1990. Video rental stores (remember them?) were out of the movie everywhere and there were waiting lists in stores all over the States as people wanted to hire the movie before the sequel was released. Although many of the people on the waiting lists simply wanted to enjoy the first movie all over again, a lot of those rentals had to do with the supposed ghost that could be glimpsed in the first movie – the 3 men and a baby ghost.

The Ghost – The Dead Boy and the Shotgun

Almost as soon as the movie was released there was a rumour that there was something a little bit off with one of the scenes in the film, but these rumours stayed relatively quiet until news of the second movie being released broke. There were breaking news stories everywhere about the 3 men and a baby ghost and even more stories flying around about who the ghost was and why he was in the film.

The little boy appears in a scene around an hour into the film with Danson’s character, Ted, and his mother. She’s walking through a room, holding the baby and after she picks him up, they walk together back through the house. A young boy can be seen behind the pair, peering at them from behind a pair of curtains. Stories were circulating everywhere that the young boy was in fact a ghost and that he’d committed suicide by throwing himself from an upper story window. People were incredibly eager to find out the origins of the boy and Americans everywhere felt incredibly sorry for him – just who was he and what drove him to this act? Why did he choose to show himself in this film?

The thinking at the time was that the boy’s parents were absolutely stricken with anguish and grief over his sudden death and quickly moved out of the house following the tragedy, little known to them, leaving behind the spirit of the boy in the huge house, to be alone with his thoughts once more. The studio then took over and made the movie.

Soon after that, however, the theories changed again. There’s a ruffle in the curtains of the scene with the boy, which many people believed was caused by the shape of a rifle that he was holding. Not only that, but in the scene just prior to the one where the boy was visible, one of the characters was holding a rifle. That meant that many people then changed their thinking to believing that the 3 men and a baby ghost had in fact committed suicide using a shotgun and was showing viewers the gun as a way to express his anguish over his death. There were stories everywhere about the boy, and multiple papers were reporting that the boy’s parents were threatening to sue if the movie studio did not remove the images of the young boy. So what happened next?

Three Men and the Truth

People magazine put out a rather sensational story in 1990 that should have put an end to the stories that were circulating, but for many, that wasn’t quite the end of the three men and a baby ghost legend. Steve Feldstein spoke to the magazine from Touchstone Pictures and said that the young boy that everyone believed to be a ghost was actually a prop that had got cut from the movie, but that had gotten left behind in the scene that everyone was talking about – a mistake on behalf of the editors. It was said to be a cardboard cutout of Ted dressed in a tuxedo involving him being cast in a dog food commercial, but that scene ended up being cut from the movie. The cutout was apparently placed behind the curtains and was simply meant to be a bit of a joke for the crew and cast but it was forgotten about and ended up in the scene, and thus the legend was born. 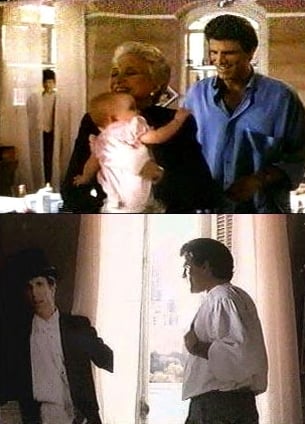 Many people still didn’t believe the explanation given by the movie studio, simply because the two “beings” – the cardboard cutout and the young boy – don’t look all that similar. Many said that the young boy didn’t have a top hat and that he looked like he was appearing at an entirely different angle to the cardboard cutout, which led numerous people to believe that there was a huge cover-up at play. Plenty of people accepted the explanation of the ghost in 3 men and a baby, however, and just thought that it was a strange tidbit of cinematic history.

Although the cardboard cutout and the young boy undoubtedly look different, there is little evidence to suggest that the three men and a baby ghost legend was true. There was no evidence to suggest that a young boy had committed suicide at that time and in fact, the movie had been shot on a set and not in a house as the rumours had claimed. However, that’s not to say that a haunting had not occurred – we’ve all heard tales of movie set ghosts in the past. So what do you believe? Let us know!