The Ghosts of Berry Pomeroy Castle

The once majestic castle has been reduced to a romantic ruin. It is reported to be one of the most haunted places in the British Isles. There are several tales associated with the castle. Although the castle only retains a little of its former glory and grandeur, it continues to captivate visitors who come in thousands.

The castle lands were granted by William the Conqueror to Ralf de Pomaria, a Norman knight. It was a reward for unfailing support and loyalty during the conquest. Ralf chose not to build a fortress; however, instead, he built an unfortified manor house, which would become his family’s home for the next 400 years.

It wasn’t until the late 15th century that the Pomeroy’s began to build the castle fortress you see today. This is almost certainly due to the escalating troubles in the area, which would later lead to the War of the Roses.

The castle remained in the hands of the Pomeroys until the 1540s. Sir Edward Seymour then acquired the castle with the help of his influential family.  Sir Edward Seymour was the brother of Jane Seymour, the third wife of Henry VIII. He made numerous changes to the castle, but it was not long before he made a lot of enemies as the Lord Protector. He was then removed from power by the Earl of Warwick, imprisoned and executed in 1552.

The castle remained in the hands of the Seymours until 1688 when it was finally abandoned. The once well-kept castle then started to deteriorate. A good number of rooms were uninhabitable. The English Heritage took over in 1977 to save the castle from complete ruin. In a continual effort to restore the castle, restoration work still goes on.

The castle is said to be the abode of various spectres. A number of ghostly phenomena and ghostly sightings have been reported in the castle. Some of the most reported apparitions in the castle are the Blue Lady and the White Lady.

The White Lady is the restless soul of Margaret Pomeroy. She haunts the dungeons of St. Margaret’s Tower and has been seen waving to visitors. She was held captive in the castle dungeons by her sister, Eleanor, because of jealousy and starved to death in the dungeons.

The Blue Lady lures people into various parts of the castle and gets them lost. People believe that she is the ghost of the daughter of one of the Norman castle lords. She was raped by her father and became pregnant with his baby. Her father strangled the child in one of the rooms of the castle. Other tales say that it was she who strangled the child. She has become the death portent of the Seymours.

People have witnessed strange lights in the castle. Voices have been heard, and cold spots in the castle have been reported too. There are also the apparitions of a lady wearing a grey dress and a Cavalier, as well as ghostly shadows.

Related pages: The 5 Most Haunted Places in Devon 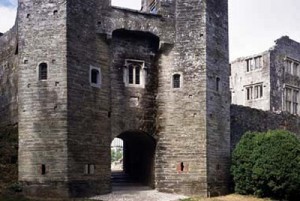 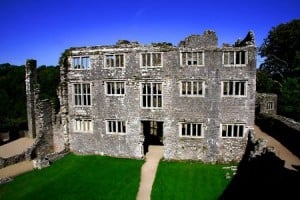 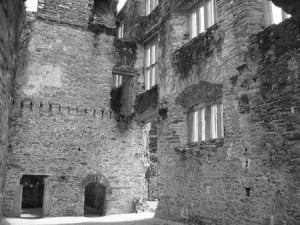 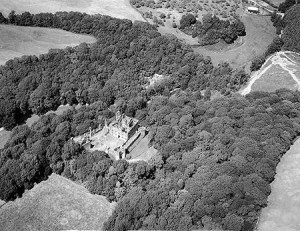 Berry Pomeroy is the perfect setting for those looking for somewhere romantic and adventurous to visit for a day. Tucked away amongst a deep wooded valley, it’s ideal for a picnic or woodland walk and is perfect for a family day out.