The Ghosts of Fyvie Castle

As with most old castles, the odd tale of a ghost or two is commonplace, and with Fyvie Castle, that certainly is the case, with a little more to boot. Regarded by many as one of the most haunted places in Scotland, here are just some of the spirits and stories surrounding this infamous castle.

Thought to be the ghost of Lady Meldrum, who died sometime in the 13th Century. It is believed that she requested to be buried in the walls of a secret room in the Meldrum Tower.

It wasn’t until 1920 that her remains were discovered. The remains were laid to rest in the cemetery, and from that day forward, the castle has experienced several strange and unexplained occurrences.

The apparition of Lady Meldrum has been seen many times, so much so, she’s considered the ‘head ghost’ of the castle.

The sounds of a trumpet being played can be heard throughout the castle, believed to be the ghost of Andrew Lammie, who died of a broken heart after finding out about the death of his beloved Agnes.

Andrew is also said to appear dressed in rich tartan near the castle wall.

On several occasions, the figure of a man has been seen, only to disappear when approached.

The Legend of ‘The Weeping Stones of Fyvie’

Upon visiting the castle sometime ago, Thomas the Rhymer, also known as True Thomas (because of his future telling abilities), spoke of a prophecy that goes:

This message refers to three stones used in the construction of the Preston Tower, the Charter Room, and one stone rolled into the Ythan River.

They were taken from a sacred burial site, and until they are returned, no male heir shall live ever to inherit the castle.

Is the story true? No one knows, but the fact that a male heir has never survived to inherit Fyvie Castle could very well mean there is some truth to the legend.

Thought to be Dame Lilias Drummond, the wife of Sir Alexander Seton. After producing five children, none of whom were male, and Alexander grew impatient.

Longing for a son, his attentions turned towards the cousin of his wife, Grizel Leslie. Heartbroken and betrayed, Lillias retired to their home in Fife, where she became ill and died shortly after.

On the night Alexander married Grizel, in their bedroom in the castle, the story goes that they could hear heavy sighs coming from outside their window, believing it to be nothing more than the wind.

Upon opening the window in the morning, Alexander found the name D LILIAS DRUMMOND carved into the stone. This name can still be seen to this day!

Her ghost is said to roam the corridors of the castle, bemoaning the betrayal of her husband and leaving behind a scent of Rose petals in her wake.

Related pages: The Most Haunted Places in Aberdeen

Fyvie Castle near Turriff in Aberdeenshire, Scotland, is believed to have been built around the 13th Century by William the Lion.

The castle served as a Royal stronghold until 1390, shortly after the Battle of Otterburn. After Royal ownership, it was passed down to a succession of clan families. Scottish families of Preston, Meldrum, Seton, Gordon, and Leith, respectively.

Each of the families constructed a new tower onto the castle, the first being the Preston Tower. Dated between 1390-1433, the tower remains to this day.

The Seton family added the Seton Towers in 1599, which you can see dominating the entrance to the castle. The great processional staircase was also added by Seton’s sometime after. The Gordon Tower was added in 1777, and lastly, the Leith Tower in 1890.

There are several famous portraits hung in the castle and displays of authentic armour and weapons.

The descendants of Alexander Leith, who owned the castle in the late 1800’s – the early 1900s, sold the castle to the National Trust for Scotland in 1984.

The castle is now open to the public to admire its architecture, art collection, and family history. 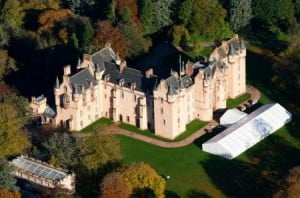 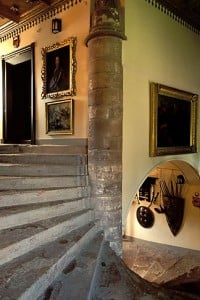 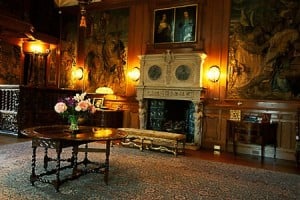 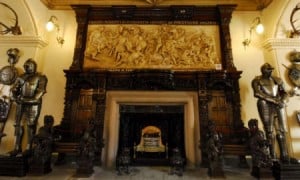 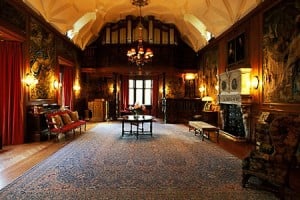 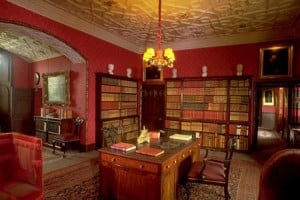 You can visit this imposing fortress any time of year, though to tour the inside, you’ll need to visit on Thurs-Sun between 13 May-31 October, between 11am-5pm.

The Grounds and Garden are free to explore and are open year-round.