The Ghosts of Alton Towers

Unbeknown to many, Britain’s most popular theme park is named after the mansion Alton Towers, which still stands on the grounds today. The hauntings in the house are also unknown to the many millions that pass through the parks gates each year. 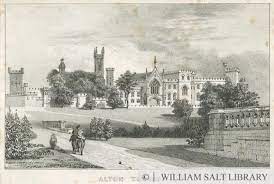 The site that the Alton Towers mansion stands has a history dating back to 1000BC. Evidence suggests there was an Iron Age fort here during that time. The site was handed over to the Saxon King Ceolred of Mercia in 700AD. He ruled for just seven years before becoming insane, which adds to the site’s history of being cursed.

The belief that this site is cursed was again emphasised in the 19th Century when the legend of the old oak tree began. The building you see today was the brainchild of Charles Talbot, who began transforming the building during the early 1800s, the 15th Earl of Shrewsbury. It is he who this curse centres around.

The story goes that in 1821 Charles was on his way back to the mansion one night when his coach came upon an old beggar woman in the road. She asked for help, but he refused. She pointed to an old oak tree nearby and told him that a member of the Talbot family would die for every branch of the tree that falls.

There was to be a storm that very night, and a member of Charles’ family did indeed die of a sudden illness. Upon hearing about the death, Charles headed out to the oak tree to find a branch had indeed broken off. He was determined not to allow this same fate to happen to anyone else in his family, so he ordered the tree be chained up. If you go to the tree, you’ll see the chains are still there to this day.

One of the most active areas of the towers is on the ride ‘Hex’, which is located in the mansions’ old armoury and picture gallery. People who queue for the ride have often reported seeing children dressed in Victorian clothing and being hit by objects and stones.

In the main area of the building, the presence of a large man has been felt around the Music Room, often accompanied by footsteps. The footsteps have also been heard around the Banqueting Hall, along with a large dark outline of a person. When Most Haunted investigated this location, their Medium David Wells picked up on a large hooded male constantly angry.

Perhaps the most common paranormal occurrence is the sighting of a lady in a long dark dress strolling through the house’s corridors. When she’s seen, you often smell a strong aroma of perfume. She takes on a very lifelike appearance, with one member of staff believing her to be a guest who was in the park after hours. She told her she wasn’t allowed in here and needed to leave. The woman did as she was asked but slowly faded away, much to the fright of the staff member.

During Most Haunted’s investigation of the Towers back in 2007, the team came across many reports. One of the team members was attacked by an unseen force, leaving him with a scratch to the head. Stones were also thrown throughout the night, and David Wells, the teams’ medium, picked up on the woman seen walking the corridors. Leading him to believe she was a past governess and used to be in charge at the mansion.

Although there are no longer after-hours ghost tours at the location, the ruins of the towers are still accessible through Alton Towers Resorts’ ‘Heritage Tour’. You can also access the building whilst on the Hex ride or through one of the recent scare maze additions that have been installed in the building.