The 6 Most Haunted Places in Bolton

Bolton may seem like the average town, but it is incredibly active when it comes to paranormal activity. There is a wide selection of haunted places to choose from, including several haunted pubs, theatres, and stately homes.

Let’s take a closer look at some of the most haunted places in Bolton: 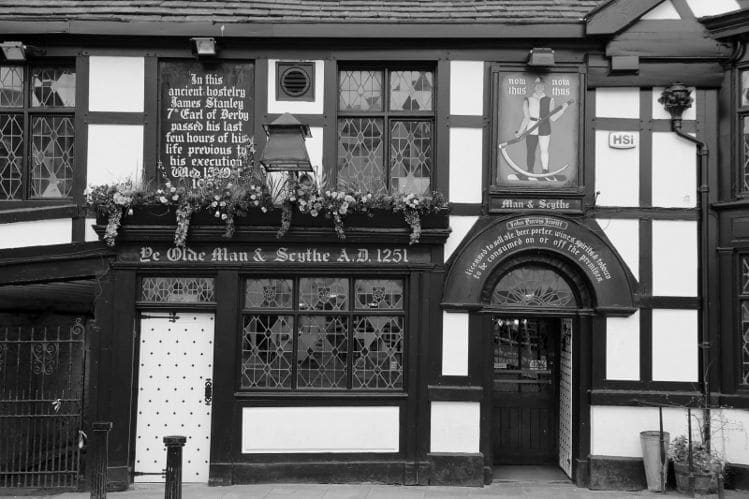 Ye Olde Man & Scythe is nestled in Bolton’s town centre, and you can tell instantly from your first glance at the building that this place is old! Time seems to have stood still for the world-famous cider house to the extent that it looks totally out of place today! Ye Olde Man & Scythe is one of the most haunted places in Bolton and is the fourth oldest pub in the whole of Britain, and it is every bit as famous for its resident spooks as it is for holding that title!

Several different ghosts have been reported at Ye Olde Man & Scythe over the years. Still, perhaps the most famous one is the seventh Earl of Derby’s spirit, who was beheaded right outside the pub! He is certainly not alone, as the pub is alleged to be haunted by no fewer than 20 restless spirits! There have even been reports of poltergeist activity! In 2014, the bar manager came downstairs to find broken glass all over the floor. Fearing a break-in, he retreated to the office to view the CCTV footage only to see glasses flying off shelves and smashing with nobody in sight!

Now a Toby Carvery, Watermillock House in Bolton is a mansion built by local mill owner TM Hesketh back in the late 1800s. It has built a reputation as a local haunt for years.

After the family no longer used it, the house was used as a hospital during the First World War. Run by the Red Cross, Watermillock specialised in treating pilots that had suffered horrific burns, among other severe injuries.

A mysterious lady reportedly haunts the upper floor, where things can be heard moving around, and disembodied footsteps are often heard. If you visit the cellar, you’ll likely become overwhelmed, with people often reporting the feeling of being watched and just a general uneasy feeling. 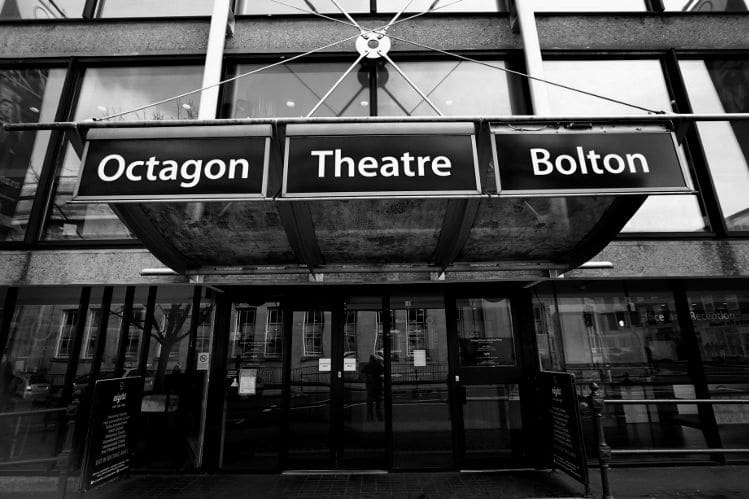 Bolton’s Octagon Theatre first opened in 1967, and for several years it has been regarded as one of the most haunted places in Bolton. The Octagon Theatre has a resident spirit called Fida. The story goes that Fida was the very first wardrobe mistress at the theatre who passed away while she worked there. It seems that she has never left the theatre, and from time to time, sewing machines will turn on of their own accord, and an apparition of Fida has also been seen in several different locations around the building. 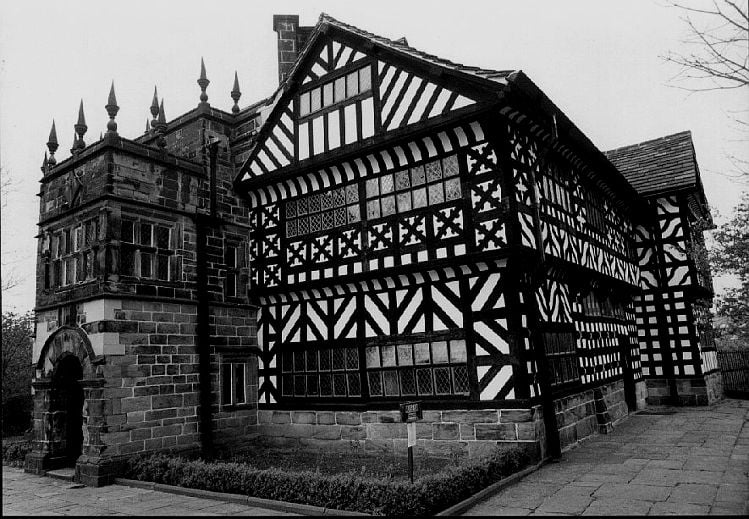 Hall’i’th Wood is a little bit of a hidden gem. The name translates to ‘Hall in the Woods’, and these days it is surrounded by a modern housing estate which makes it look incredibly out of place! Built back in 1648, records show another building on the same site before this. Hall’i’th Wood is probably best known for being the home of Samuel Crompton, inventor of the spinning mule, but it is also gaining a reputation as one of Bolton’s most haunted places.

Some of the strange occurrences visitors have reported to Hall’i’th Wood include phantom footsteps, white mists and even full apparitions. However, the most common reports say that children who visit often run out crying, saying that ‘Betty’ shouted at them and told them to leave! It is not clear who this ghost named Betty is or why she doesn’t like children coming to visit! 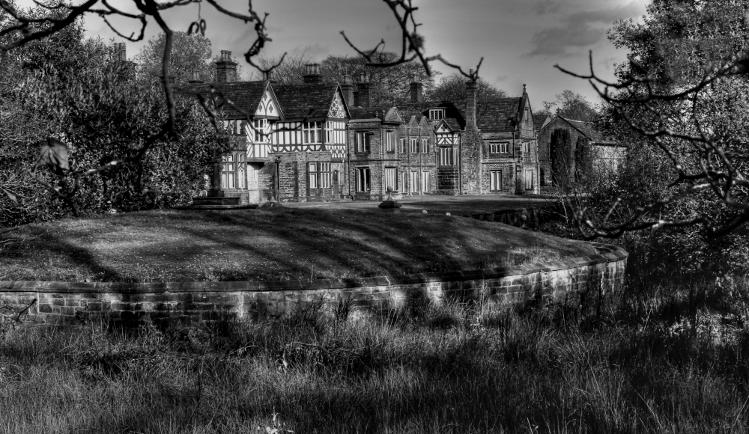 There has been some building occupying the land where Smithills Hall now sits since the early part of the 13th century. Over the years, many influential families have been linked to the property, including the Radcliffes, the Ainsworths, and the Bartons.

Richard Ainsworth purchased Smithills Hall in 1801 when the family had accumulated considerable wealth during the Industrial Revolution due to their success as bleachers.

Richard’s grandson inherited the building in 1870. He engaged the architect George Davy’s services to remodel some of the building’s 16th-century parts to add further wings to what was already a sprawling building. Nigel Ainsworth then inherited the hall in 1926 and later sold the property to Bolton Council in 1938 for a reported £70,000.

In 1963, the council opened up some of the oldest parts of the hall as a museum, while the remainder of the building served as a residential home and day centre. These days Smithills Hall serves various purposes as a museum, restaurant, wedding venue and of course, a paranormal hotspot!

As you have already seen, Smithills Hall has a substantial amount of history surrounding it, so it should not come as a great surprise that this is one of the most haunted places in Bolton. If the reports are anything to go on, this is a hive of strange occurrences.

Many different ghosts are believed to call Smithills Hall home. A mischievous spirit has been known to pinch staff and visitors on the bottom, and people frequently feel themselves being touched by unseen hands close to the stairs between the Bower and Solar rooms.

A lady in a period dress walks on the stairs, and visitors often smell burning wood.

The Solar Room also has the spirit of a little boy with long black curls called Tommy, and occasionally he is joined by a young girl. There are also reports of Royalist soldiers passing by the windows outside the withdrawing room who are linked to the Civil War.

Over in the church, a grey lady sits in one of the front pews, and a second spirit has been seen kneeling at the altar.

One of the most interesting paranormal tales linked to Smithills Hall is connected to George Marsh, a local curate tried in the courtroom and sentenced to death and burned at stake. It is said that Marsh left a footprint in one of the flagstones on the way to the room in which he was held.

At some point, the marked flagstone was removed by one of the residents. However, as soon as it was removed, a considerable increase in poltergeist activity eventually prompted it to be returned, albeit facing the wrong direction! Now there is an evil spirit in the room, and many people refuse to enter the room!

The Ghosts of Smithills Hall

Regarded by many as one of the most haunted locations in the Lancashire, Turton Tower is full of ghost sightings and paranormal happenings.

Located in Chapeltown, North Turton, this 16th-century manor house is a designated World Heritage site, dating back to the late Middle Ages.

Legend has it that the tower is haunted by the ghost of a lady whose dress can be heard rustling around in empty rooms as she wanders through the building.

Guests and staff alike have witnessed an unknown female figure, but she disappears as soon as anyone approaches. She’s not friendly by any means, with one visitor reportedly being pushed in the face by the spirit.