The 5 Most Haunted Places in Lincolnshire

Lincolnshire is one of the most historical counties in the East of England. This is rural England at its absolute best, and the county holds appeal for just about everybody. Lincolnshire has a rich history in the aviation industry and historical landscapes at every turn.

Whether you want to enjoy bustling market towns, charming villages, coastal views or picturesque English countryside, Lincolnshire has got you covered.

However, Lincolnshire also has a darker and more mysterious side. Where there is history, there is almost always reports of ghosts reliving the past in some way or another.

With that in mind, let’s take a look at the top five haunted places in Lincolnshire.

Thorpe Hall was once owned by the Bolle Family, most notably by Elizabethan adventurer Sir John Bolle who took part in Sir Walter Raleigh’s 1596 attack and capture of Cadiz.

Sir John was captured by Spaniards and thrown in a dungeon. However, his cell looked out onto a street regularly used by a wealthy Spanish noblewoman, Donna Leonora Oviedo. She liked Sir John and would bring him food, eventually bribing the jailers to secure his freedom.

Some variations of the tale say that Sir John was not in Jail but that he had taken Donna prisoner and she fell in love with him.

Sir John headed back to England, where he already had a wife. Donna had wanted to accompany him back to England, and he was forced to come clean that he was already married, which broke her heart.

He believed that he had left his Spanish lady friend behind for good, but some months later, she followed him to England and ended up killing herself in the garden of Thorpe Hall.

Sir John was filled with guilt and hung a portrait of her in her favourite green dress in the home. He also had a place set for her at his table every meal. To this day, visitors to Thorpe Hall report seeing a lady in green roaming the grounds forever searching for Sir John Bolle.

One of the most well-known stories about Lincolnshire ghosts is the allegedly haunted stretch of the A15 road. The majority of strange sightings are reported along the Southern stretch of the road.

There have been various sightings of spectral figures, including a phantom cyclist, a little girl dressed in pink, a hitchhiker in a leather jacket and phantom horses.

However, perhaps the best story is the ‘Ruskington Horror’, a tale that has been doing the rounds since the sixties.

There have been frequent reports of ‘something’ running out in front of their vehicle as they approach the turn off for Ruskington.

It has been described in various ways, but most often as a man with his arm raised who suddenly appears in front of the car.

Drivers believe they have struck a pedestrian and will stop and get out, but nobody ever finds any trace of the man.

Reports have been frequent since the nineteen-sixties, but seem to have tailed off around 2013.

Gainsborough Old Hall is a medieval manor house that dates back to 1460.

It was built by a wealthy gentleman named Sir Thomas Burgh, and it remained the Burgh Family residence until 1596, when it was sold to a merchant named William Hickman.

However, that does not necessarily mean that the Burghs have left the property! With at least three spirits in residence, Gainsborough Old Hall is a fantastic place to go in search of Lincolnshire ghosts.

One of the ghosts spotted on the property is Elizabeth Burgh, the daughter of Sir Thomas.

The story goes that Elizabeth had fallen in love with a man from a lower class and was planning to elope with him. However, her father found out and locked her in her bedroom as a punishment. This had tragic consequences because Elizabeth died a few days later.

It is unclear how exactly she died, although most people say it was from a broken heart. Elizabeth is frequently seen around the tower room.

Another ghostly lady that haunts Old Gainsborough Hall is known simply as the Grey Lady.

She is often spotted wandering in a particular corridor where a hidden door was discovered not too long ago. The sightings are so frequent that it has come to be known as ‘The Ghostly Corridor’!

It isn’t all about the ladies staff and visitors have also reported seeing a ghostly boy in an area of Gainsborough Old Hall that was originally the West range. The young boy is said to have died in the house during Victorian times.

If one type of building is almost always guaranteed to play host to some form of paranormal activity, then surely it would be prisons!

These places often see the absolute worst that the human race have to offer, and the walls will have seen more than their fair share of violence and suffering.

One such place is Lincoln Prison which has secured its place as one of the top haunted locations in Lincolnshire thanks to several creepy incidents over the years!

The prison is situated within the grounds of Lincoln Castle, which itself was used for incarcerating criminals as far back as Norman times. The front section of Lincoln Prison is the older part, built in 1787 to house debtors.

The building was expanded in 1847, and shortly afterwards, the prison adopted the ‘American Style’ of incarceration, which saw inmates confined in isolation and only allowed to talk to guards.

This inhumane treatment of the prisoners has likely played a massive part in the hauntings today.

Many inmates developed mental health issues following long periods of isolation, with many descending into insanity.

Added to the fact that more than 100 inmates were executed at the prison using the ‘long drop’ method, it is no wonder the building is haunted!

Terrified visitors have reported seeing the ghost of a former matron haunting one of the rooms, apparently frantically rushing to the aid of a female prisoner who had committed suicide to avoid her public execution.

Another female spirit, all in black, is often reported on the steps to the gallows.

Others have reported cell doors banging and disembodied screams in the male wing of the prison even while they know it is empty.

There have been visual sightings too of doors opening of their own accord and unidentified flashing lights.

Perhaps the most disturbing reports are inhuman growls and sobbing in the old graveyard where unclaimed prisoners were buried! 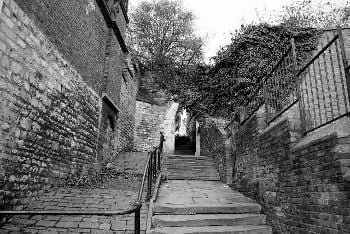 Over the years, there have been various sightings and unexplained occurrences at Greestone Stairs.

One of the most common sightings reported is the spirit of a woman said to come from Saint Joseph’s convent.

She is seen carrying a baby in her arms and is usually seen walking from the convent entrance along the path to a flowerbed where she lays the baby down. It is believed that she is lying to rest a dead child.

People also report seeing the spirit of a cleric about halfway up the stairs standing under a crooked lamppost. He is seen wearing a hat and a long coat. It is believed that the cleric may have hung himself from that same lamppost.

One thing that most sightings of the cleric have in common is that he does not appear to be scary or threatening. He is often described as a guide or protector for weary travellers heading to the nearby cathedral.

Aside from the ghostly sightings, there are also frequent reports of other strange occurrences. These seem to be centred on the stone archway located about a quarter of the way up the stairs.

It seems to be pretty difficult to take photographs in this spot because, for some unknown reason, they usually turn out distorted or feature strange flecks of light obscuring the image.

Related pages: The Most Haunted Places in Lincoln