11 Most Haunted Places in Dorset

In the 18th century, there was a thriving smuggling economy in Dorset due to its coves, caves and sandy beaches and these locations form part of the picture-book imagery seen on many tourist websites featuring landforms such as Durdle Door, Lulworth Cove, Chesil Beach and the Isle of Portland with its amazing lighthouse. During the Second World War, Dorset was involved in the preparations for the Normandy invasions with Poole and Portland being two of the main embarkation points for British troops.

This rich history provides a catalogue of paranormal encounters stretching across the entire county. Reports by visitors have included everything from sightings, to explained sounds, through to poltergeist activity, giving you the opportunity to tick every box of your ghostly vacation.

Here, we highlight 11 of the most haunted places in Dorset:

The manor house in the village of Bettiscombe is known as the ‘House of the Screaming Skull’. The skull is purported to be that of a Jamaican slave who was brought to the manor by John Frederick Pinney, on his return from the Caribbean island of Nevis where he had been a slave owner. It is said that the slave became seriously ill with consumption and as he lay dying, he swore that he would never rest unless his body was returned to his homeland of Nevis. However, after the death of his faithful slave, the wealthy Pinney refused to pay for the body to be repatriated with Nevis and instead buried the body within the grounds of St Stephens Church at Bettiscombe. Shortly after the burial, screams were heard coming from the cemetery along with reports of activity of a paranormal kind including windows rattling and doors slamming. Worried villages pressed for the exhumation of the body, believing it to be responsible for the activity they were experiencing. The body was taken from the churchyard to the manor house but over the years, the skeleton has all but vanished, except for the skull, where it has now remained in the manor for centuries. 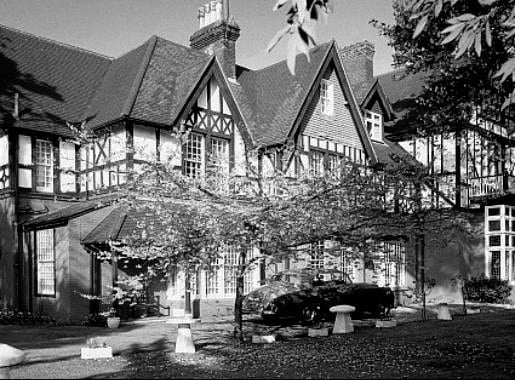 This hotel was once the home of a vaudeville performer, Lillie Langtry who was celebrated as a young woman of beauty, charm and talent who was very much a celebrity of her time. It is said that the Prince of Wales (later Edward VII) was besotted with Langtry and took her as his mistress. Her love became very complicated and it is alleged that she went on to have affairs with Earl of Shrewsbury, Prince Louis of Battenburg and a man named Arthur Clarence Jones. It is said the ghost of Lillie Langtry haunts the Langtry Manor Hotel, spotted a number of times by the chef.

It is believed that the area around Corfe Castle has been occupied for almost 6,000 years. A castle was built on-site by William the Conquerer and then Queen Elizabeth I sold the property to Sir Christopher Hatton in 1572. Since then, the castle has been through the wars, quite literally, including the English Civil War. With this long history of settlement, it’s no surprise that the castle and its surroundings have been linked to scores of ghost sightings. A headless woman in a white nightgown has been spotted at a bridge just beneath the castle. Lights have been spotted on the ramparts of the castle in the dead of night. The cries of a weeping child have been heard on nights where the air is calm and still, the sound of a galloping phantom horse has been heard and the sighting of an apparition of a man wearing a big floppy hat has been reported too!

Situated close to Sherbourne, Trent Barrow is a wooded hill just east of the village of Trent. In the middle of this wooded hill lies a strange pond but apparently no one has any idea how deep it is. Stories connected to this location include that of a coach and horses that lost their way, never to be seen again. It is said that the sound of hooves can be heard at night around the area. This area is also linked to the folklore of King Arthur and is said to be the place where Arthur’s sword, Excalibur was thrown. The area which is heavily lined with trees and has a mystical, misty feel about it, certainly lends itself to the idea of days of yore and the associated legends.

An amazing, natural limestone arch, located on the Jurassic coastal area near to Lulworth, his mysterious formation has been the scene of hauntings including that of a report by a sailor anchored at Durdle Door. He claims to have heard a scream coming from the shore. When looking out to see where the noises were coming from, he saw a group of young girls who appear from the water, dance and then disappear. It is alleged that they could have been the ghosts of maidservants that fled the fire at nearby Lulworth Castle in 1929. The castle was restored in the 1970s. A figure of what is thought to be Napoleon also manifests in this area. The man is seen to study a map before folding it up and then vanishing.

A man with half his head blown off has been seen in this hostelry. This haunting is said to be as a result of a tragic accident.  In 1877, a man called George Clapp had been shooting, calling at the pub on his way home. Leaving his shotgun by the door of the bar, another customer noticed some wire entangled around the trigger and tried to remove it. However, in his attempts to make the gun safer, the gun went off, killing one of the men in the bar.

On the promenade, there is said to be a corner seat where there have been several sightings of an old woman who ‘smells of death’ if you manage to get close enough. It is alleged that the fiancé of one of the witnesses to the old woman’s presence, sat in the very spot himself and died of a heart attack.

Tyneham Village is mentioned in the Doomsday Book and today the entire village stands, uninhabited. It was taken over by the Ministry of Defence in 1943, displacing 225 residents. Only open to the public at specific times as it is now a military firing range, visitors experience the very real notion of time standing still in this village, as it remains very much a pre-war state. Paranormal investigators to this site have recorded voices caught on tape including one calling himself Warren, unexplained screeching noises and stones being thrown at the investigation team. This is certainly an area that could be rich in sightings and phenomena but even worth a visit for its surreal, eerie, atmosphere.

The ghost at this location was once known as Fred but has since been renamed Mary, for it is believed that the phantom is actually a local woman who was due to marry her US serviceman lover during the Second World War. However, it is said that she was murdered just before her wedding day, just adjacent to where the museum was built. Mary apparently moves small objects, creates cold spots throughout the museum and is responsible for the sound of phantom footsteps that have been heard in the building.

At more than four centuries old, this building has been an inn, a bank and a private house before becoming a museum. One of the owners, Captain Albert Codd is believed to haunt the building. Dressed in a bright yellow smoking jacket and black trousers, he has been seen contentedly wandering around the museum by a number of people. The museum also houses a ‘haunted dress’, which dates from the 17th century. The dress is of very high quality and appears to attract the apparition of a young woman, who guardedly looks over the dress. The young woman is said to appear very frequently!

1. The Grosvenor Hotel, ShaftesburyBOOK A ROOM 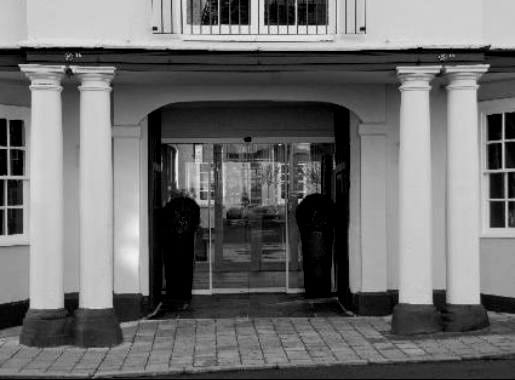 The Grosvenor Hotel has been voted the 5th most haunted hotel in the UK and has had visitors report some very spooky happenings. The hotel started life as a 16th-century coaching inn. A grey lady is said to haunt the upper floors of the hotel where she has been seen walking the corridors. The cellar, which is the oldest part of the building is said to be the haunt of a monk, which has been seen by several witnesses. And the ghost of a playful young girl likes to frighten guests by pulling off the sheets as they sleep at night.

Other Haunted Places in Dorset: