7 Most Haunted Places in Worcestershire

Worcestershire is an area with a very eventful history, having played an integral roll in the English Civil War. It comes as no surprise that the whole area is rife with paranormal activity.

Here we have summarized some of the places that you will not want to miss on your tour of the most haunted places in Worcestershire! 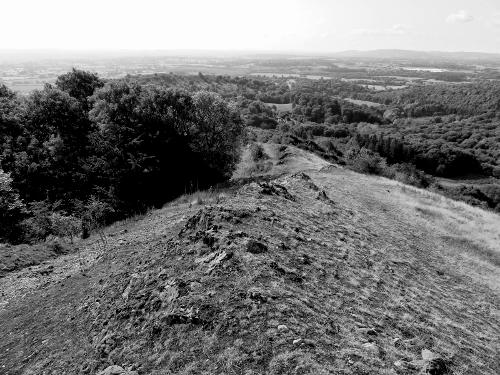 Raggedstone Hill is another of the places that you will want to stop at on your tour of the haunted places in Worcestershire! The twin peaks are said to be haunted by the spirit of a former friar from Little Malvern Priory. The friar is said to have confessed his sins because he felt tortured by his own carnal desires, but despite the Cleric being guilty of similar thoughts, or perhaps because of it, he condemned the friar to serve his penance by crawling on his hands and knees up the rough side of Raggedstone Hill every single day. In time, the friar became angered by the severity of his punishment and is said to have climbed to the peak where he hurled a curse upon the church and anyone who had the misfortune to have the shadow of the peaks fall on them. On uttering the curse he apparently dropped dead! Since that day many of those who walked in the shadow of the hill has fallen victim to the curse including The Duke of Clarence, Richard III, the Prince’s in the Tower, Henry VI, Cardinal Wolsey and Anne Boleyn all of whom met a tragic end soon after visiting Raggedstone Hill. To this day there are scattered reports of an apparition seen crawling on the hill! 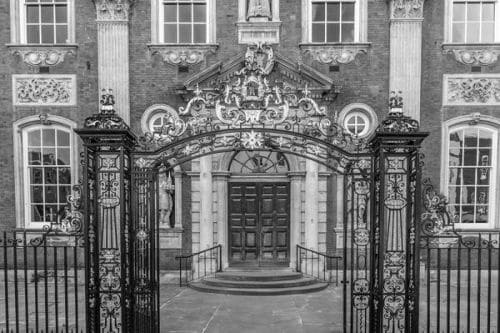 Worcester Guildhall, or Queen Anne Guildhall as it is also known,  is a beautiful Grade 1 listed building dating back to 1721. It is actually built on the site of the previous Guildhall which can be traced back as far as 1227! The Guildhall is said to be one of the most haunted places in Worcestershire and most of the activity is attributed to the fact that the building’s basement has a series of cells which date back to the Tudor era and which were used to incarcerate prisoners over the course of several centuries! In fact, the cells were still in use as recently as the early part of the 20th century.

The cells are said to be haunted by the spirit of a young boy who apparently committed suicide by hanging himself in one of the cells. In recent years, staff and visitors have both heard disembodied moaning and screaming emanating from one of the cells. There are also instances of paranormal activity reported in a few other areas of the building including the Assembly Room which is said to play host to a female spirit. Several visitors have reported smelling old fashioned perfume in the room upon entering and a handful has been startled when she actually appeared in front of them, gliding around the room! 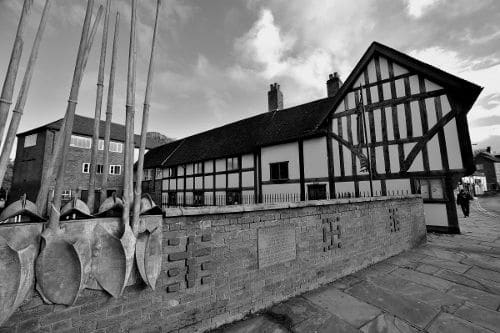 Another Grade 1 listed building in Worcester in the 12th century Commandery building. The Commandery has served a variety of different purposes over the years including a church, a residence, a monastic hospital, a hotel and its current use – a museum. Records suggest that The Commandery was founded by the Knights Hospitaller back in medieval times to serve as an almshouse or hospice.

The building became the private residence of TheWyldes who were a wealthy family of cloth merchants in Tudor times. It then serves as headquarters for Charles 11 and the Royalists during the English Civil War in 1651. The last of the Wylde family to own The Commandery was Thomas Wylde of Bridgnorth in 1785. These days the building is owned and operated by Worcester City Council.

In terms of paranormal activity, The Commandery is home to one of the most famous Worcestershire ghosts – the Duke of Hamilton. During the English Civil War, the Duke of Hamilton was the Royalist Commander in Chief. He was fatally wounded and was brought back to The Commandery where he eventually died. It is said that his dying groans can be heard throughout the building on quiet nights. There have also been reports of a ghostly monk walking in the Minstrel’s Gallery, a phantom woman crying in the Preacher Room and the sounds of armoured men sword fighting just outside of the great hall! The Commandery is definitely one of the most haunted places in Worcestershire. 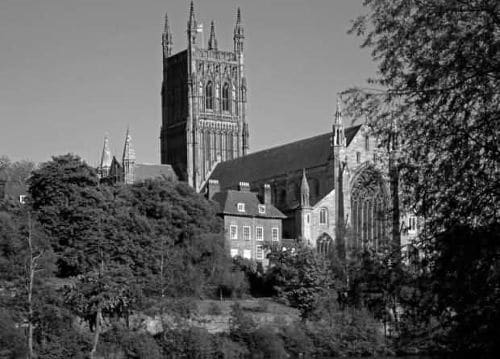 The Worcester Cathedral that you see today actually dates back to 1084, but prior to that, there was actually a priory on the same site which is believed to have been built in 680. The cathedral overlooks the River Severn and is best known for its Norman Crypt, Chapter House and Central Tower. The library is also well known, dating back to  Saxon times. It houses an impressive collection of medieval manuscripts and post-medieval books. It is also one of the most haunted places in Worcestershire.

Witnesses have reported seeing the apparition of a spectral bear in the Cathedral! Terrified visitors say that the apparition appears and then rears up on its hind legs as though preparing to attack! However, luckily for the witnesses, it then disappears just as it looks ready to strike! Other apparitions that have been reported seeing a ghostly, hooded monk that appears as a misty figure in photographs taken by visitors to the cathedral. 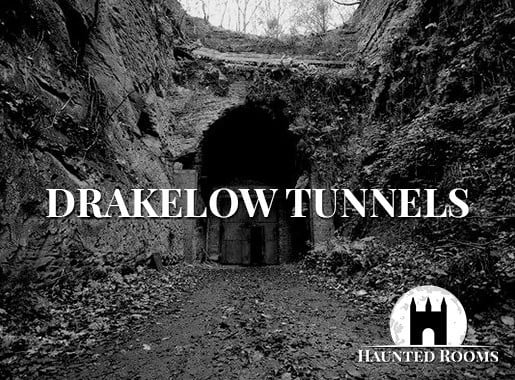 Drakelow Tunnels stretch out for about 3.5 miles beneath Kingsford Country Park.  At one time, they served as a bunker in World War II and also a nuclear bunker during the Cold War. These days the site serves as a museum and a haunted one at that! Records show that during construction, 6 people passed away thanks to an accident involving a roof collapse. It is believed that the paranormal activity that has been reported in the tunnels can actually be attributed to these deaths. Dogs have been found barking at empty corners and people report being pushed, touched and having their hair pulled. At some stage during the site’s decommission there were rumours of satanic rituals being carried out in the tunnels. Some visiting mediums say that this has unleashed something darker in the tunnels and indeed, some visitors report the feeling of an oppressive and even demonic entity in the canteen area!

Over the years, many visitors have heard wartime music playing through the tannoy system which has been disconnected for quite some time! Visitors often capture orbs, mists and light anomalies when they are taking photographs in the tunnels! 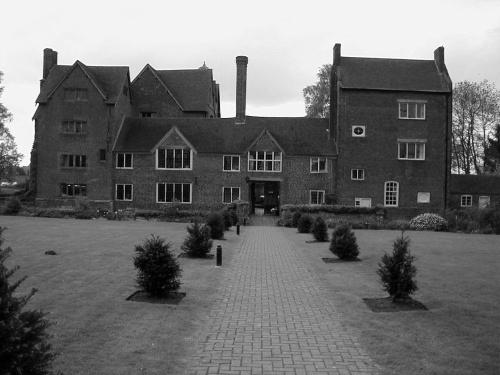 Harvington Hall is an impressive red brick Elizabethan property with tall chimneys. Most of the rooms are still filled with original paintings and furnishings and the house has what is possibly the best collection of priest holes of any home in the country! The owners of Harvington Hall won’t admit that the property is haunted, but anyone who has visited will tell you that the property is imbued with the energy of those that have gone before! However, the grounds are a totally different story! They are said to be haunted by Mistress Hicks who was basically accused of being a witch! She was hanged at the crossroads near Harvington Hall with the belief that the formation of the cross would contain her spirit, but no such luck! Mistress Hick is frequently spotted roaming the grounds of Harvington Hall! 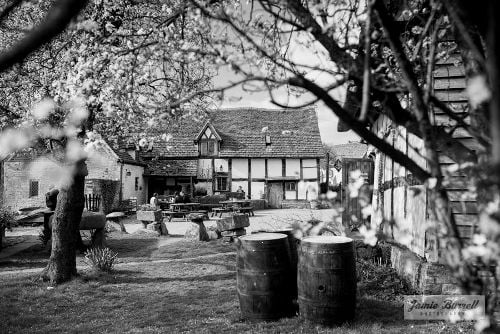 The Fleece Inn is a stunning timber-framed medieval farmhouse which became an inn in 1848. It has not changed much over the years, mostly down to the fact that the same family, The Taplin’s, owned the building up until 1977 when the last of the family members, Lola Taplin passed away. One of the most interesting features of The Fleece Inn is found on the hearths by two of the fireplaces where you can still see ‘witch marks’ dating back to the times when it was believed witches would enter your home via the chimney! The marks were drawn each night before bed and they have been repeated so frequently that an indent has formed in the stone!

As for the paranormal activity at The Fleece Inn, it is generally accepted that the place is haunted by the restless spirit of Lola Taplin. In life, Lola was a formidable lady who single-handedly ran the pub for the last 30 years of her life. She frequently used to tell customers that they should be honoured to be drinking in her home. She allowed only alcoholic beverages and food was banned. However, following her death, the rules have been relaxed and Lola is not at all happy. On one occasion, a customer placed a sandwich box on the table and then watched in horror as it was lifted into the air and hurled to the floor! Similar disturbances have occurred whenever people are eating in the pub! There have also been reports of phantom footsteps and of small objects being hurled as if in a fit of rage.