5 Most Haunted Places in Glasgow

Glasgow is one of the largest cities in the United Kingdom and has become a melting pot of people and cultures from all around the world. Over the past couple of decades, the city has established itself as one of the premier locations in Europe for sports, art, and education. Among its many sons and daughters, the city boasts singer-songwriter Donovan, AC/DC guitarist Angus Young, and, of course, comedian and general Glaswegian Billy Connolly.

However, there is a darker side of Glasgow which some visitors, and even natives of the city, go their entire stay without ever hearing about. Glasgow is said to be a hotspot for paranormal activity and there are multiple locations around the city where people have reported encountering otherworldly entities.

The spooky goings-on in Glasgow are not just limited to the city’s buildings. Many of the most terrifying paranormal encounters have occurred on roadsides and other outdoor locations.

In this article, we’re going to be looking at some of Glasgow’s paranormal places of pilgrimages, both indoors and out.

Here are five of the most haunted locations in Glasgow. 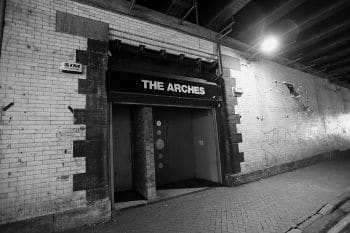 Prior to 1991, the Glasgow Arches nightclub was a derelict area located beneath the Glasgow Central train station. The area was converted at the beginning of the nineties to house an exhibition focusing on Glasgow during the city’s time as the European City of Culture. Once the exhibition was over, the property was sold to one Andy Arnold, who planned to use the setting to create a unique theatre space which would introduce a new generation to the joys of performance.

As well as various theatrical events, The Arches hosted multiple club nights and in 2007 was named the 12th best club in the world by DJ Magazine (that’s a publication, not a DJ). Despite this accolade, The Arches experienced a dramatic and devastating change in fortune and was forced to close its doors last year.

A number of things contributed to the declining numbers The Arches saw in its later years, but its reputation for being haunted certainly didn’t help.

There were a number of eerie occurrences reported at the venue, the most frequent of which revolved around the spirit of a little girl. According to multiple members of staff, it was not uncommon for a young girl to appear in the corridors of the building, always clad in centuries old clothing.

Though the girl was clearly not of this world, she often seemed lost and confused, and staff could not help approaching her to offer some  assistance. However, as soon as they got close to her, the girl would let out an ear piercing scream and vanish. 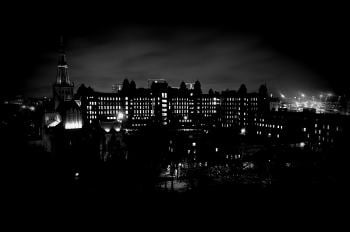 You know, it’s really a surprise that more hospitals don’t appear on these lists of supposedly haunted places. With all the deaths seen in those buildings, you’d think they would be crawling with spirits and creatures of the afterlife. Then again, few hospitals have the history of the Glasgow Royal Infirmary.

The hospital was first built in 1794, when leeches were still seen as a legitimate way to treat illnesses. The hospital under went major renovations at the beginning of the 1900s and then again in the 1970s. With centuries of both physical and mental suffering, as well as frequent remodelling, it is no surprise that there has been so much paranormal activity recorded at Glasgow Royal Infirmary.

The most infamous of the many ghosts at the hospital is that of The Grey Lady. Many doctors who have worked at the hospital have reported seeing a woman draped in grey travelling unaccompanied through the hospital corridors. Most who have seen the woman recall pursuing her, assuming she was a patient and being fearful of her attempting to escape the hospital. However, the story always ends in the same way; the woman disappears before she is captured and a scan of the rooms turns up no missing patients.

If someone being treated at the hospital were to report such an event, it would probably be met with more than a degree of skepticism. However, when multiple doctors – considered by many to be among the most trustworthy people on the planet – claim to have seen the spirit, one can’t help but wonder if there are, in fact, deceased patients still roaming the halls of Glasgow Royal Infirmary. 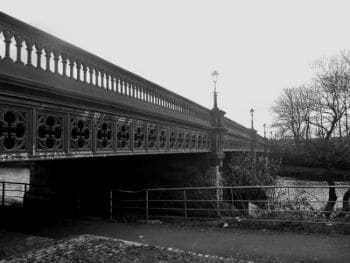 I mentioned earlier that Glasgow has numerous outdoor locations which are said to be frequented by the ghosts of former Glaswegians. Dalmarnock Road Bridge is one such place.

Despite the fact it is nearly 200 years old, there is only a single ghost associated with Dalmarnock Road Bridge, and sightings have been scarce since the 1970s, when activity at the location was at its highest.

The spirit which haunts (or haunted) the bridge, is said to be that of a suicidal young man. Eyewitness reports describe the man as being in his early thirties, and decked out in a blue jacket and black trousers which would seem out of place in any era other than the 1930s.

Those who encountered the ghost say they first saw him standing at the top of Dalmarnock Road Bridge, staring into the water below as if in a trance, seemingly contemplating throwing himself to his death. When approached by members of the public, the man would leap from the top of the bridge only to vanish into thin air.

Records from the early decades of Dalmarnock Bridge are spotty at best, so it is impossible to determine if a suicide ever took place in the area or just who the depressed ghost might be.

Reports of the spirit were copious throughout the seventies, but have now pretty much died out bar one or two instances.

The Dalmarnock Road Bridge is the perfect site for anybody who wants to visit a haunted location for themselves but wants to minimise their chances of actually encountering a ghost. 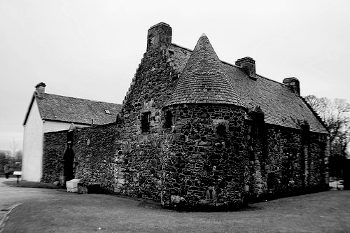 Built in the 1500s, Provan Hall has been home to many high profile figures, including Scotland’s King James IV. 500 years later, it is maintained by the National Trust for Scotland. Provan Hall is actually composed of two buildings, meaning there is twice as much room for paranormal happenings.

Provan Hall is supposedly inhabited by three distinct ghosts, one of which is believed to be Reston Mather, the final owner of the home. Mather’s ghost is most active in Blochairn House, the newest of the two buildings. Visitors have reported witnessing Mather’s apparition along with countless disembodied voices and inexplicable footsteps and bangs.

The older building – which is also called Provan Hall – is home to the spirit of a woman and a young boy. It is believed both were killed by the woman’s husband, who was infuriated to return home after four years away to find his wife had become a mother. Blinded by rage, the man murdered his wife and the bastard child.

Since then, visitors to the first house have reported encountering the mother and her child as they cower in fear, possibly reliving the final moments of their lives. Minor paranormal occurrences such as footsteps and disappearing objects have also been recorded, as have the sudden drops in temperature indicative of a spirit.

Mary, Queen of Scots lived a miserable existence during her time imprisoned in Loch Leven Tower. While living within the tower walls, Mary’s physical and mental health began to deteriorate, and it is believed that she miscarried twins while she was locked up.

Mary managed to escape the castle in 1568 and quickly set about putting together an army in order to wrestle the regency away from her half-brother, James Stewart.

This lead to the Battle of Langside, during which Mary’s army of 6000 strong was handily defeated by the army of her brother. It is said that about 300 soldiers lost their lives during the battle, and the multiple sightings of spirits at the site of the battle would support that number.

Now, that isn’t to say there are ghosts roaming the battlefield day and night, trying to slaughter anybody they don’t recognise. For much of the year, Langside Queen’s Park is relatively quiet. On the anniversary of the Battle of Langside, however, it pretty much becomes a paranormal free for all.

Those who have visited the park on the anniversary of the brutal war, in which hundreds of people lost their lives in less than an hour, have reported seeing the fallen soldiers of Mary, Queen of Scots roaming their former battlefield.

According to witnesses, the would-be heroes move throughout the park as if they were still in the middle of battle, determined to bring the country back to their leader. It is unknown if the phantom soldiers are aware that they are no longer among the living, but one can only imagine how horrible their eternity must be if they have to spend it in the knowledge that they lost their lives in a battle which their side didn’t even win.

Most Haunted Hotels in Scotland