What Ghost Hunting Equipment you Need and Where to Buy it

Carrying out thorough ghost hunting investigations is a long and tedious process, and to be in with the best chance of catching some evidence, you need to have the right ghost hunting equipment with you. The larger professional teams have an array of equipment they use, some of it extremely expensive, that ordinary groups and individuals simply don’t have the budget to buy.

Below, you’ll find the more popular and affordable pieces of ghost hunting equipment that you’ll need for your investigations. It’s not all necessary at once, as you can get started with nothing more than a decent camera. If you have a small budget, just start there, then add to your ghost hunting kit over time.

So, let’s get to it, here are some top recommendations for what ghost hunting equipment you need for a thorough ghost hunt…

For the countless fans of ghost hunting TV shows who are itching to get off the couch and track some spirits on their own, professional ghost hunter Russ Vogel’s arms beginners with all they need to start investigating. Discover proven scientific methods and the latest technology used by the pros.

The most basic necessity of all the tools for paranormal investigation is the camera. They’re not only used to capture any potential paranormal activity, they can be used to document your investigation.

Digital cameras are the simplest and best option to use for amateur and professional ghost hunters alike. Because you can transfer photos directly to your computer for further investigation, it saves a lot of time and money when compared to developing shots taken using a film camera.

The one drawback with using a digital camera though can be the lack of settings to choose from (in many cases) and there can be a lag period when taking your photos.

On an investigation, you may want to record a video to document your experiences. For this, you’re going to need a good IR (infra-red) night vision camera.

It’s a matter of preference whether you choose digital over analogue, both have their benefits. With digital it allows for easy uploading to a computer and the audio file can then be shared easily. Some seasoned investigators still use analogue as they allow for better record keeping. Whichever digital recorder you choose, it’s recommended that you have two with you at all times, so you can cross-reference each during a review.

As you may be investigating in the dark, it’s a good idea to stock up on torches. Preferably it will be one with a red lens, but clear ones are fine too. The red lens doesn’t interfere with night vision, yet it still provides you with a good light source for finding your way around a location.

Pack at least 3 maybe even 5 sets of spare batteries for each device! Spirits are known to drain the energy from fully charged devices, and you never know when your batteries are going to run out of power! So it’s always better to prepare.

If a group of you are investigating a location and you are splitting up, it’s always handy to have a walkie talkie with each party, as you can cross-reference experiences as they happen.

Used to make a note of the time of any experiences and to time your investigations in different areas of the location. Best to buy one with an illuminating face or fingers so you can see it in the dark. Of course, you can use your phone but we recommend using a watch as it wouldn’t affect your eyes like the lighting of the screen on a phone would.

Used to note down anything and everything that happened on the night, such as fluctuations in meter readings, anomalies on camera, recordings, and any personal feelings or experiences.

A video record of what is going on is always a good idea, just in case you miss something with the naked eye, which is likely given you’ll be in the dark! You should carry one around with you, as well as having one or two stationary in rooms where you’re not investigating. Ideally, they’ll have a built-in hard drive or record on memory cards, so you can easily upload the footage to a computer to analyse any evidence.

The EMF detects electromagnetic fields, which are a known attribute to paranormal activity. If you notice a sudden high spike in one particular area, then this could relate to something paranormal however, it could also be related to wiring. Check to see if you’re near any wiring in the walls, floors, ceiling etc. If you get an unusual reading, do your best to rule out only other source, before you come to any conclusion!

Sudden cold spots can often be associated with ghosts, so it’s important to have a thermometer on hand when you need it. It can be used as a backup as well to any readings from your EMF detector, or other captured anomalies. Always take a base reading throughout the location first, and take note of any drafty areas that could be caused by ventilation or old windows.

If you Want Something Really special

This is a good bit of kit to have set up when you’re in other areas investigating. If it goes off when you’re in another room, then it can lead to some interesting evidence. When you do set this up in an area, always make sure you have a camcorder set up, pointing towards it, so you can review the footage to see what set it off. 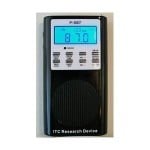 The spirit box is a relatively new piece of ghost hunting kit that was designed by Frank Sumption back in 2000 whilst he was carrying out his EVP research. The box received notoriety when it was used by the Ghost Adventures crew for the first time during an investigation at Trans-Allegheny Lunatic Asylum on October 30, 2009.

Read reviews of the Spirit Box on Amazon

How the SB7 Spirit Box Works

The box flicks between AM frequencies rapidly with white noise used as a filler. The received noise was then fed into an ‘echo chamber’ on the box which enabled spirits to manipulate the noise to form words, and the output is fed into a speaker, thus allowing communications in real-time.