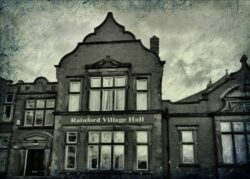 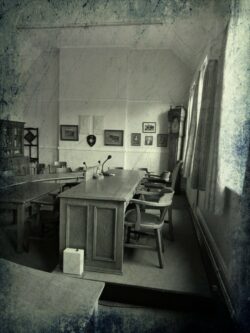 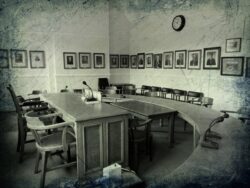 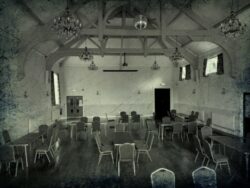 This striking Edwardian building has served a variety of uses over the years, the most eye-catching of which was a morgue prior to, during, and after the First World War.

Join Haunted Rooms for a thrilling night of real ghost hunting at the 115+-year-old, Rainford Hall in St Helens.

The hall itself built over 115 years ago, was used as a dentist, baby clinic, and dance hall amongst other things, but most interestingly it was used as a morgue around the First World War.

With stories of Witches, Heretics, and Clay Pipes, Rainford is a village with a rich heritage.

For generations, residents have heard “whispers” of folktales and witchcraft, with there believed to have been at least 3 supposed witches living in Rainford. The Merseyside Witches as they’re known were drowned and hanged in the town.

However, recent research suggests witchcraft could have been more prevalent than first thought, with many executions thought to have taken place in and around Rainford itself.

Rainford is also just a short drive away from the infamous Crank Caverns, another place shrouded in myth and legend.

There’s without a doubt something going on in this area of Merseyside, and the hall itself, with reports of disembodied footsteps, groans, and dark figures commonplace.

Come and see what is lurking in this historic building together with the Haunted Rooms team!

Book early as these will be sold out soon!

Access & Parking: Free parking is available opposite the village hall.

Accessibility: The location is wheelchair friendly, and also has a disabled bathroom.

What to Expect from the Ghost Hunt at Rainford Village Hall

The whole of the Rainford Village Hall will be open to you for the evening.

You will have the chance to look around the space before the event to familiarise yourself with its layout. Shortly before the event kicks off, we’ll run you through a quick induction and safety briefing, followed by a short talk and introduction from our team. You’ll then split into smaller groups with your family and/or friends if you’ve come together, and we’ll begin our vigils for the night!

We do have mediums and sensitives with us for every event. Anybody that has sensitive abilities we encourage you to come forward, as it only increases the energy and enjoyment for all in attendance.

To get the most from the evening we encourage you to try your hand at as many things as you can, and if you’re feeling particularly brave you should give our Ouija boards a try, as well as joining in with our table tipping experiments as we try to commune with the spirits and ghosts of Rainford Village Hall. Who knows we may come into contact with one of the Merseyside Witches!

For those who are that touch braver than the average soul, you’ll also have the chance to do some lone vigils in the most haunted spaces! Why not try your hand staying alone where the old morgue used to be?

Spots are likely to fill up fast for these dates, so don’t wait and book now!